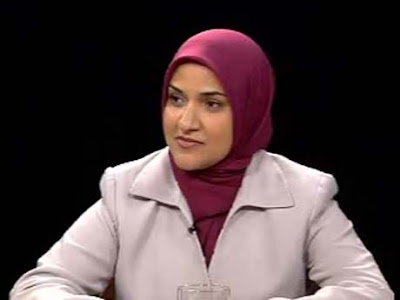 Dalia Mogahed
The results of this poll were released on August 2, 2011. I predict that in the coming days we are going to see a major media offensive to mainstream Islam in this country.

This poll will, I predict, be a part of that offensive. Look for this poll to be brought up again and again by pundits and government officials.

Who even knew there was a "Gallup Abu Dhabi"?

These findings are among the many featured in a new report released Tuesday by the Abu Dhabi Gallup Center, Muslim Americans: Faith, Freedom, and the Future, based on Gallup surveys conducted throughout 2010. Building on Gallup's early 2009 report on America's Muslim community, Muslim Americans: A National Portrait, this analysis tracks changes since 2008, delves into current social and political research topics, and provides a series of data-driven policy recommendations.
In sharp contrast with Americans who identify themselves with other faith groups, Muslim Americans are more likely to say military attacks on civilians are never justified (78%) than sometimes justified (21%). Respondents from other faith groups, particularly Mormon Americans, are more likely to say military attacks are sometimes justified than never justified. The opinions of Americans who don't identify themselves with any religion are more in line with those of Muslim Americans, but they are also more divided.
There is wider agreement that attacks on civilians by individuals or small groups are never justified. At least 7 in 10 American adults from all major religious groups agree that these attacks are never justified, but Muslim Americans again are most opposed, with 89% rejecting such attacks.

In line with their high disapproval of the targeting and killing of civilians by individuals or small groups, 92% of Muslim Americans think that Muslims living in the U.S. do not sympathize with the al Qaeda terrorist organization.

Majorities of Americans from the other major religious groups studied also believe that Muslims in America are not sympathetic to al Qaeda, but there is a notable range of opinion -- from 56% of Protestants to 70% of Jewish Americans. Sizable minorities of U.S. Catholics (33%), Protestants (33%), and Mormons (31%) do not dismiss the possibility that Muslims Americans hold some sympathy for al Qaeda.
In addition to examining U.S. Muslim's political and social views 10 years after Sept. 11, the latest report also looks at their spiritual engagement.
About the Report
Muslim Americans: Faith, Freedom, and the Future is based on a nationally representative study of Muslim American perceptions and the views of other major religious groups in the U.S. The report compares trends on Americans' life evaluations over the past three years as well as probes Muslim and non-Muslim perceptions on issues of national identity, terrorism, foreign policy, religious discrimination, and political participation.
Read the complete report.

And, who is in charge of Gallup Abu Dhabi?

And, who is Dalia Mogahed?

Read more at: http://www.investigativeproject.org/1458/dalia-mogahed-hizb-ut-tahrir-representative-tout
Dalia Mogahed, a member of President Obama's Advisory Council on Faith-Based and Neighborhood Partnerships, joined a representative of Hizb ut-Tahrir (HT) for a television interview in Great Britain on Sunday.
The Global Muslim Brotherhood Daily Report (GMBDR) noted that Mogahed was interviewed along with Dr. Nasreen Nawaz, women's representative for HT, on the British Muslim show "Muslimah Dilemma," which airs on the Islam Channel. GMBDR described the program as "a show presented by members of Hizb ut-Tahrir" featuring Nawaz "in her capacity as spokesperson" for the group.
In some ways, Mogahed's performance during the 45-minute program (which has been posted to HT's website and can be viewed here) offers a tutorial on how not to make America's case to the Muslim world. Mogahed, who was interviewed by telephone, did not challenge any of the views expressed by Nawaz or HT - including the group's call for establishing an international caliphate and imposition of Islamic law, or sharia, which includes suppression of women's political rights.
Both Mogahed and Nawaz touted the purported benefits of sharia for women. Mogahed, who is executive director of the Gallup Center for Muslim Studies, was asked about a 2005 Gallup survey of Muslim women entitled "What Women Want – Listening to the Voices of Muslim Women." Mogahed's Gallup unit conducted 8,000 face-to-face interviews with women in eight predominantly Muslim countries and reported that many of those women wanted the law to be based on sharia.

More on Dalia Mogahed from Discover the Networks:


Dalia Mogahed was born in Egypt. When she was five years old, her family immigrated to the United States, where she later became a naturalized citizen. She earned an undergraduate degree in chemical engineering, and then a master's degree in business administration from the University of Pittsburgh. After completing her schooling, she took a job as a marketing products researcher for Procter & Gamble. Today Mogahed is a senior analyst and executive director of the Gallup Center for Muslim Studies, a self-described “nonpartisan” research center that collects and analyzes data on the views of Muslim populations around the world. She also directs the Muslim-West Facts Initiative, through which Gallup and the Coexist Foundation disseminate (to key opinion leaders in Muslim nations and the West) the findings of the Gallup World Poll.

In her role with Gallup, Mogahed led a large-scale survey of Muslims worldwide. Mogahed reported that according to her research, most of the world's Muslims support democracy; a large majority support freedom of speech; only 7 percent are political radicals; and Muslims across the globe are just as likely as Americans to reject attacks on civilians as morally unjustifiable. Such findings of which served as the basis for Who Speaks for Islam? What a Billion Muslims Really Think -- a 2008 book which Mogahed co-authored with professor John Esposito. In addition, Mogahed's Gallup survey provided key data for Imam Feisal Abdul Rauf's "Shariah Index Project" --  whose stated goal was to "define, interpret and implement the concept of the Islamic State in modern times."

Mogahed has spoken frequently on on the subject of Muslim attitudes and opinions to audiences affiliated with such entities as the High-Level Group of the United Nations Alliance of Civilizations, the World Economic Forum's Community of West and Islam Dialogue group, and the Brookings Institution's U.S.-Islamic World Forum. She also has discussed Islamic affairs with British parliamentarians, American senators, and religious leaders from various faiths.

Together with such luminaries as Feisal Abdul Rauf, former Secretary of State Madeleine Albright, and diplomat Dennis Ross, Mogahed was a leading voice in the Leadership Group on U.S.-Muslim Engagement, which in September 2008 issued a 154-page recommendation paper -- a number of whose suggestions (on how to improve America's relationship with Muslims globally) were eventually adopted by President Barack Obama's administration. The paper specifically called on the U.S. to engage opposition parties (including the Muslim Brotherhood) in Egypt, and to use intermediaries to immediately engage Hamas -- in hopes of moderating the terror group.

In April 2009, Mogahed was appointed by President Barack Obama to serve on his Advisory Council on Faith-Based and Neighborhood Partnerships, making Mogahed the first veiled Muslim woman to serve in the White House. Mogahed explained that her duty in this post would be "to convey... to the President and other public officials what it is Muslims want."

Mogahed was also assigned to the Department of Homeland Security's advisory council, and she testified before the Senate on how the government could effectively engage with the Muslim community.

Shortly after Mogahed's appointment to the Obama administration, an interviewer asked her “what kind of advice” she would be giving the President “to improve relations with U.S. Muslims and the Muslim world.” She replied:


“I would advise him to listen first and foremost. Many have claimed that terrorists have 'hijacked Islam.' I disagree. I think Islam is safe and thriving in the lives of Muslims around the world. What the terrorists have been allowed to take over are Muslim grievances. Muslim concerns over injustice have been largely dismissed by the previous [Bush]administration, leaving a vacuum exploited by extremists.”

Mogahed also recommended that “a senior member of the [Obama] administration go on a ‘listening tour’ of the U.S. and hear what Muslim Americans are concerned over” -- most notably, issues like “racial profiling, discriminatory immigration policy, and the erosion of civil liberties.”

In early October 2009, Mogahed was interviewed on a British television program hosted by Ibtihal Bsis, a member of the extremist Hizb ut Tahrir party, which seeks to facilitate the non-violent destruction of Western democracy and the creation of a worldwide Islamic state governed by Sharia Law. Bsis and another guest (also a member of Hizb ut Tahrir) stated that Sharia should be “the source of legislation” for all nations in the world; they also repeatedly condemned the “man-made law” and the “lethal cocktail of liberty and capitalism” that existed in Western societies. Mogahed did not dispute any of their assertions.

Instead, Mogahed stated that the Western view of Sharia was "oversimplified," and that the majority of Muslim women around the world associate Islamic Law with "gender justice." "I think the reason so many women support Sharia is because they have a very different understanding of Sharia than the common perception in Western media,” she said.

Mogahed views the United States as a nation rife with discrimination against Muslims. She said in 2009:


“Islamophobia in America is very real. Gallup finds that Muslims are among the most unfavorably viewed groups in the U.S. and only a little over a third of Americans say they have no prejudice against Muslims. This presents a grave danger to America as a whole. The disease of racism, by definition, is a bias in judgment. This means that racism clouds sound judgment and leads people to make irrational decisions. It also divides a nation and prevents the full utilization of its intellectual and cultural resources. Racism is wasteful. Racism is a strategic disadvantage.”

In addition to her aforementioned affiliations, Mogahed is also a member of Women in International Security, and of the Brookings Institution's Crisis in the Middle East Task Force.

Read more at: http://www.investigativeproject.org/1458/dalia-mogahed-hizb-ut-tahrir-representative-tout
Posted by Pastorius at 4:32:00 pm

If this is true, then no special conditions for licenses, or tortuous law enforcement methods to prevent bad feelings, or special considerations to deflect supposed islamophobia is needed, is it?

Now why would EPA go and bring logic into this?

5) What religion demands the death penalty for apostates?