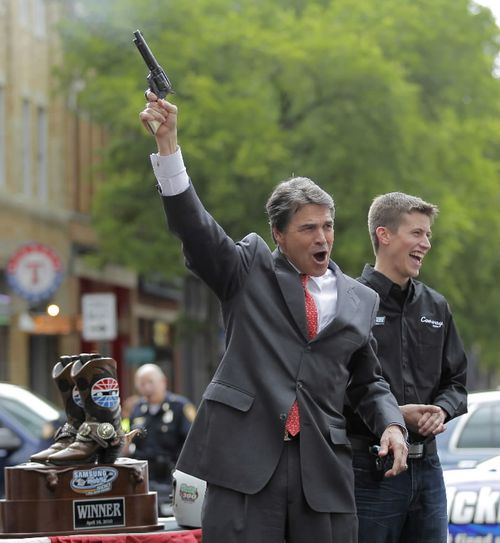 I can't wait until this guy is President


Perry is a friend of the Aga Khan, the religious leader of the Ismailis, a sect of Shia Islam that claims a reported 15 to 20 million adherents worldwide. Sprouting from that friendship are at least two cooperation agreements between the state of Texas and Ismaili institutions, including a far-reaching program to educate Texas schoolchildren about Islam. That’s a partnership that has already prompted a bit of grumbling in far-right corners of the blogosphere and could conceivably become a primary issue if, as expected, Perry enters the presidential race.


Perry has been sucked into the propaganda vortex, and is now wielding his enormous power to influence changes in the schoolrooms and in the curricula to reflect a sharia compliant version of Islam. He is a friend of the Aga Khan, the multimillionaire head of the Ismailis, a Shi’ite sect of Islam that today proclaims its nonviolence but in ages past was the sect that gave rise to the Assassins.


Perry has concluded at least two cooperation agreements between the state of Texas and the Ismailis, including a comprehensive program to feed children in Texas public schools and taqiyya nonsense about how Islam is a religion of peace.

So... what of it?
I am about to direct you to what I think might just be the greatest rejoinder in the history of blogdom.
Now, because I have an ego, and don't want to fully admit how good this is, better than I've ever managed, I will console myself with the notion that he has the facts on his side, and ergo, is almost cheating.
I strongly, strongly urge you to read this. Now, if it seems long, skip to the part of it -- the last half -- wherein the actual curriculum used to teach Texas students about Islam is presented.
I know what you're thinking. Shit, I thought so too. Religion of Peace. We must stop attacking them. Israel is mean.
Oh no. Oh no no no.
The "dhimmi" curriculum that was actually produced by Texas teachers consulting with Aga Khan is...
...Well, I don't want to get your expectations up, because once expectations are raised, they can never be met, can they?
But actually reading this curriculum (which I trust Ms. Geller did not), my honest reaction? My real reaction reading it?
This is going to hurt Perry, because this is so biased against Muslims it will reinforce perceptions he is some kind of rootin'-tootin' six-gun shooting cowboy yahoo.
Okay, I've raised your expectations. But you read it yourself. Read what the Aga Khan (and his apparently really non-violent fellow Muslim moderates) worked out with Texas teachers to inform kids about Islam.

And then you tell me Perry's a "dhimmi."


(START OF EXCERPTS) Because Islamic society is in a different state of development than Western society, conflicts naturally arise.
1. Countries of Western Civilization have secular governments, which means great toleration of cultural and religious differences.

What? Did he just praise the West?


2. Countries of Islamic Civilization for the most part either have religiously dominated governments or demands to make them more religious, which mean less toleration of cultural and religious differences.

3. Muslims often lack respect for Western traditions and points of view. The Muslim relationship to the West is colored by the belief that Western beliefs [whether Christian or atheist] are defective and therefore inferior to Islam.

Did he just say Muslims lack respect for Western traditions?


From its early days, Islam reacted aggressively toward its civilized neighbors the Byzantines and the West. Muslim attacks against the West can be viewed as occurring in three waves...


Modernity developed in the West and made the West so powerful that any civilization that did not imitate the West in this regard was at a extreme disadvantage. Modernism featured three characteristics: 1. High levels of technology, integrated into society, along with modern science.
2. The creation of much wealth, which, with technology, makes the state more powerful militarily.
3. An openness (in its most developed form called the Open Society by Karl Popper), which features tolerance, pluralism, and has a secular governance.
The failure of Islam to adopt modern ways and adapt them to Islamic values, put Islam at a great disadvantage when dealing with the West.

Anyone feeling the attitude of dhimmitude yet?

Go read the rest at Ace of Spades. There's more. Much more.

Gellar's attacking this?
This reads like her fucking blog for fuck's sake.
"Anti-Jihadism" cannot simply degenerate into a guilt by association lunacy where the only real "goods" you have on someone is that they seem to know Muslims.

Knowing what I do about Ismaili Islam, sorry but this entire line of attack DEMEANS those who despise sharia. I have several ORTHODOX JEWISH FRIENDS who teach history and comparative religion, who truly have negative views of Islam, who ALSO agree this, in rgds to Ismailis is really a load.

After the VB thing I'm not shocked to see Pam go over the edge with this, but Spencer?

The very FACT of their use of HASHISH to whack up the assassins (Hashishim) demonstrates they read the Quran differently, and whether intentional or not allows them to ASSIMILATE into the society they are in (they have always been a minority wherever they are).

Frankly, they are bacon eating jews (as a hyperbolic example) ....not that there's ANYTHING wrong with that (since I are one).

at least two cooperation agreements between the state of Texas and Ismaili institutions, including a far-reaching program to educate Texas schoolchildren about Islam.

From its early days, Islam reacted aggressively toward its civilized neighbors the Byzantines and the West.

islam reacted aggressively toward the byzantines, the west, the egyptians, the persians, the berbers, the hindus, the buddhists, the zoroastrians, the jews, the mongols at first, the africans, etc...


3. An openness (in its most developed form called the Open Society by Karl Popper), which features tolerance, pluralism, and has a secular governance.

«Frankly, they are bacon eating jews (as a hyperbolic example) ....not that there's ANYTHING wrong with that (since I are one).»

Epaminondas said...
Halal OR Kosher for that fact are manifestations of 'what you have to do to safely eat meat/fish in a low/no tech desert or warm environment'

It can be dressed up any way you want it with prayers and what not, but that's all it is. Ad far as pork .. I've already had one near fatal heart attack so FORGET IT.

I don't worry much about kosher EXCEPT as a means t pass on the culture of my grandparents, BUT, if William Fortschen's world of One Second After would ever come to pass... I am going to the a prime mover of keeping kosher. And for the EXACT same reason my distant forbears did (who probably took the easy way out of explaining why it was so necessary to their descendants and told them GOD SAID IT). In such circumstances I would choose halal food over non halal/non kosher food, and religion has nothing to do with it