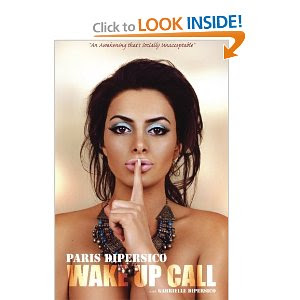 
Author Paris Dipersico has been discharged from Oakville Trafalgar Memorial Hospital after he was dragged into a forest and beaten unconscious by two male assailants Wednesday morning. Police said the victim’s hands were bound and Det. Sgt. Anthony Odoardi said they are confident the attack was targeted due to the controversial nature of his book Wake Up Call.

Co-author Gabrielle Dipersico’s home was broken into just a day after the assault and they have received death threats by Muslim extremists for insulting Islam. The Police are currently conducting an investigation along with a safety plan for the authors.

Wake Up Call has angered several religious groups, family members and it was rejected by over a dozen publishers for being "extremely controversial" and "inflammatory."

Truth is, this book looks pretty funny. This guy may be even more obnoxious than yours truly. LOL

Check out what Amazon has to say about Wake Up Call:

"I'm Paris Dipersico and I'm a narcissistic sociopath whose ego is bigger than Kim Kardashian's ass. Boundaries, Respect, Values, and a Conscience...I Lack. I say obnoxious things about fugly creatures " Wake Up Call is a story of a young boy becoming a bold character, a soul searching for identity, and of a man weaving a rich heritage while finding a place for himself in today's world. It begins with the awkwardness of adolescence, of him trying different addictions and exploiting different sexuality to see where he fits in. "I believe everything is okay, when done in moderation." He says. However, moderation is the track he's far away from.

His views and opinions stir up trouble and leave local ideas and morals shaken. Religion, a stigma, something people are afraid to discuss is what the writer has dared to take up and thrashed it down. It brings up issues we all have at one point in time. Although being brought up in a Muslim household, yet he questions the very existence of God and says: "Islam is a religion of 'peace' and Muslims will kill you to prove it."

Sounds like a good book to me ,i'll see at the local Chapters.

ordered mine on amazon.ca chapters doesn't have it yet. fairly new apparently

Just read what I could on " look inside" looks like a fun read.

where Can you buy this book in Dubai?

I hope the police do everything in their power to capture her assailants. This crime cannot go unpunished.

I would imagine the answer to your question is that you can't buy it anywhere in Dubai, except maybe on the black market.

"Islam is a religion of 'peace' and Muslims will kill you to prove it." - taken from counterjihad blogs :P

Oh wait, the author was man, I guess I was confused, and just thought woman, because it was a woman in the picture.

The woman on the cover is Gabrielle D., the co-author.

Thanks for clearing up the confusion. I didn't think I read things carefully enough.