Afghan Editor Condemns the Custom of Dancing Boys, Says: '[Boys] of Ages 15 to 20 are Normally Dressed in Women's Clothes, Dancing All the Night, Then Abused by Several Men'. 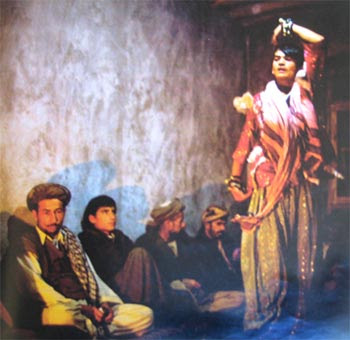 I see a Fatwa coming down on this "Editor". After all, the tradition of "Dancing Boys" is from the Koran itself.


In a recent report, senior Afghan journalist Musa Khan Jalalzai drew attention to the custom of Afghan dancing boys and their sexual exploitation by powerful and wealthy warlords in the country.

The report notes that the custom has become a status symbol in Afghanistan."A shameless business of teenage rape or Bacha-bazi has brought disgrace and shame to Afghan society. The tradition of teenage rape is an old tradition in northern and southern provinces. The tradition has roots in Afghan history. President Hamid Karzai, in his recent statement, warned that rapists should face 'the country's most severe punishment. "

The interior ministry has failed to arrest powerful rapist warlords in northern Afghanistan, as the police administration has long been involved in many illegal businesses like drug trafficking, prostitution, and playboys.

Corruption in the Afghan justice system is another problem. Courts are helpless before war criminals. Judges are the most corrupt people, who bail out or release criminals and receive millions in Afghan currency."Local residents now have demanded for a crackdown against these elements, but are skeptical because criminals are powerful and well-armed.

War criminals have representation in Afghan parliament and in government institutions. Why did this illegal business take deep roots after the fall of the Taliban regime in 2001? Afghan men of letters understand that both unemployment and poverty are the main motivators for the revival of the business of Bacha-bazi in Afghanistan. Recruitment of young and beardless beautiful boys is in progress."

Powerful and wealthy warlords in northern Afghanistan, according to press reports, recruit young boys for sex and dance, while local authorities remain powerless in stopping the practice. Bacha-bereesh [boys] of ages 15-20 are normally dressed in women's clothes, dancing all the night, then abused by several men."

"This is an established fact that a boy without beard and [is] smart normally becomes a status symbol for his master. Mohammad Zaher Zafari, head of the Northern Branch of the Afghan Independent Human Rights Commission, hopelessly said: 'Sexual abuse and even the sale of boys has been going on for years; the boys involved are usually poor, underage or orphans, and they are forced into it by their economic circumstances."Another senior official, Hafizullah Khaliqyar, head of the prosecutor's office for Baghlan province, complains that teenage boys are forced to dance.

'They are sexually abused, and they are even bought and sold. Fights take place over these Bacha-bereesh. It's increasing day by day, and it's catastrophic,' he said.""A local Afghan reporter, Sayed Yaqub Ibrahimi, recently interviewed some warlords saying that they play with dogs, boys, and love teenage girls.

In the past, Afghans were ashamed of it and trying to hide it, but nowadays, nobody feels shame and they openly enjoy this shameless business. Religious scholars condemn the custom, which they count as one of the most sinful acts possible.

Afghan ulema [Islamic scholars] are of the opinion that making boys dance and sexually abusing them is not allowed in Islam.

Maulana Ghulam Rabbani of Takhar province understands that those involved in it need to be punished."Local officials in northern provinces of Afghanistan admit the practice is prevalent but show no specific interest to intercept it. The authorities are in much dismay about the police officers' involvement in this business. Members of Afghan police in various provinces are deeply involved in male prostitution.

The interior ministry in Kabul has received thousands of complaints from locals regarding the police sexual attacks on young boys.""Keeping in view their sexual needs, in December 2010, WikiLeaks cables reported [that] U.S. company DynCorp had spent money on pimps who purchased young boys for Afghan policemen. The boys were used in Bacha-bazi. This shameless practice has also prompted the Defense Department of the United States to hire a social scientist, Anna Maria, to investigate the problem, as several U.S. soldiers on patrol often passed older men walking hand-in-hand with pretty young boys."

Reuters, in its November 19, 2007 report and Revolutionary Association of Women in Afghanistan [RAWA], quoted a 42-year-old landowner, Inayatullah, of Baghlan province as saying, 'Having a boy has become a custom for us. Whoever wants to show off should have a boy.' In his short interview with Reuter's reporter, Mr. Inayatullah vowed: 'I was married to a woman 20 years ago; she left me because of my boy,' he said. 'I was playing with my boy every night and was away from home. Eventually my wife decided to leave me. I am happy with my decision, because I am used to sleeping and entertaining with my young boy,' he told Reuters.

"A recent U.S. State Department report assessed the situation bluntly, saying that it amounts to a 'widespread, culturally sanctioned form of male rape.' The majority of Afghans have no knowledge of their country's law about male prostitution. All kinds of prostitution are illegal under the Afghan law. In Afghan society, the victims of rape and assault – both male and female – are sometimes persecuted rather than the criminals who abuse them.

"There are thousands of young boys who have undergone ordeals. But the actual numbers of these vulnerable boys are not known. In Kabul, Kandahar, Mazar-e-Sharif, Kunduz, Takhar, Baghlan, Samangan, Panjshir, and Herat bazaars, Bacha-bazi CDs and DVDs are widely circulated serving an audience who can't afford the real thing."

Bacha Bazi (Persian: بچه بازی, literally "playing with children" in Iranian dialect and "playing with boys" in Afghani dialect), also known as bacchá (from the Persian bacheh بچه‌ "child, young man, calf") or bacha bereesh (beardless boy) is sexual slavery and child prostitution[1] in which prepubescent and adolescent boys are sold to wealthy or powerful men for entertainment and sexual activities.

As mentioned in my previous article, famous poets in Arabia glorified homosexuality. As an example I am including a poem in 'Perfumed Garden' by Abu Nuwas:
O the joy of sodomy!
So now be sodomites, you Arabs.
Turn not away from it--
therein is wondrous pleasure.
Take some coy lad with kiss-curls
twisting on his temple
and ride as he stands like some gazelle
standing to her mate.
A lad whom all can see girt with sword
and belt not like your whore who has
to go veiled.
Make for smooth-faced boys and do your
very best to mount them, for women are
the mounts of the devils


Need I say anything more after this colorful rendition by Abu Nuwas ?
Posted by Pastorius at 3:53:00 pm

I have to admit, that as bad as this is in a way, it does seem strange for such a homophobic society. It also sounds like Islam both praises and condemns homosexuality simultaneously.

Hmmmm......Just wondering...do they use a different Koran in Indonesia?
Lesbian Couple Forced Apart, Put Under ‘Surveillance’, Threatened with Beheading.

“It’s disgraceful what they’ve done. Even animals search for the opposite sex,” the district religious police chief said.

The provincial parliament passed Islamic laws authorising the stoning to death of adulterers and the flogging of homosexuals in 2009 but the governor has not signed them into effect.

How did you get here, Anonymous?

Googling "Dancing Boys", were you?