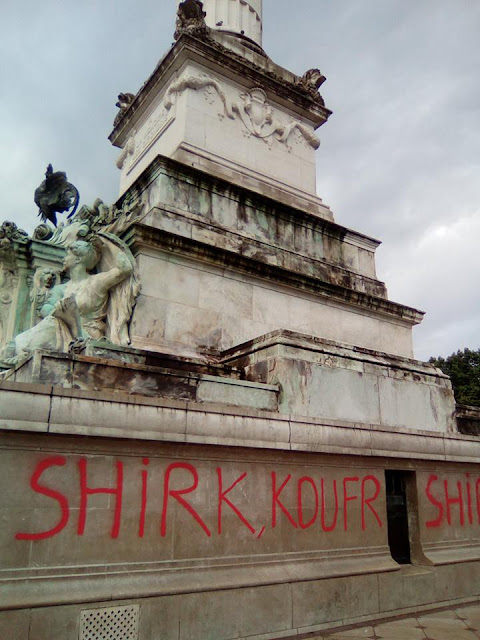 From Sebastien at Gateway Pundit:


Shouting ‘Allahu Akbar’ to passers-by, Tuesday afternoon, an Islamic State sympathizer vandalized the Monument aux Girondins, a prominent city landmark in the heart of Bordeaux before being arrested in a police operation which saw the immediate area shut down for fear of a terrorist attack.

Road traffic and tramways came to a halt around Place des Quinconces and its historic column and fountains monument, as the area, popular with tourists to Bordeaux, was sealed off. During the police operation, a 34-year-old suspect, previously known to police, was arrested and a sweep by the bomb squad was undertaken before the cordon was lifted.

Around the base of the monument, the Arabic words for ‘idolatry’ and ‘infidels’ had been painted in tall red lettering and are still visible.

A backpack left at the base of the monument was investigated for weapons and explosives. ... the backpack containing only a tablet and a copy of the Koran.

My guess is, if the French don't deport this man, or imprison him for life, he will end up going Full Frontal Jihad on them.
Posted by Pastorius at 3:47:00 pm