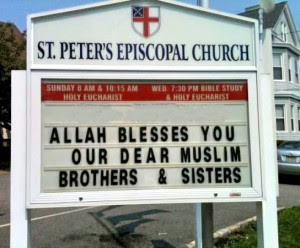 From The American Thinker:


Our culture looks to be coming apart at the seams. The June 14 attack on the GOP Congressional Baseball team is only an exclamation point in an increasingly hostile, increasingly violent, premeditated campaign by Democrats and other leftists to create an atmosphere of ungovernable anarchy.

The Christian church has not escaped this agenda. In fact, it has become a major target. The Left, in concert with its allies among atheists, Islamists, and the homosexual lobby, is engaged in a multi-front war to destroy what remains of our nation's Christian bedrock.

One of the fronts in this war comes under the innocuous heading "Interfaith Dialog". It sounds so compelling: a mutually beneficial outreach for "differing faith traditions" to find common ground and join forces to mend the fractious divisions between Muslims, Christians, Jews, and for that matter, practically everyone else.

But that is not what is accomplished.

As Robert Spencer repeatedly argues, most Muslims want to live their lives like the rest of us. They want nothing to do with the radical jihadis, Islamic terrorism, or indeed much of the classical interpretations of Islam that classifies women and non-Muslims as second-class citizens.

The problem is that while apologists reassure us that we have nothing to fear, those in the forefront of this battle, like the Council of American Islamic Relations (CAIR) and the hundreds of other Muslim Brotherhood front groups, are determined to use every tactic at their disposal to deconstruct our laws, our Constitution and our religious and secular institutions, to replace them with the Islamic version, Sharia law.

As Spencer says, "They take advantage of our ignorance about Islam to mislead people into complacency about Islam."