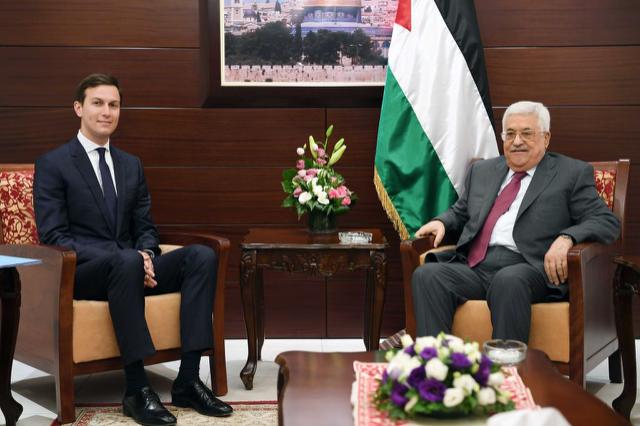 How funny is it that Trump sent a Jewish guy -  who looks like an even more gay version of Ralph Reed - to negotiate "Peace" in the Middle East.


London-based Arabic daily Al-Hayat reported Saturday that the meeting between Kushner and Abbas had been “tense.” Abbas was allegedly furious when Kushner relayed a set of demands from Israeli Prime Minister Benjamin Netanyahu, according to a translation of the report by the Jerusalem Post.

"They sounded like Netanyahu's advisers and not like fair arbiters," a senior Palestinian official told the publication. "They started presenting Netanyahu's issues and then we asked to hear from them clear stances regarding the core issues of the conflict."

Here's the thing: Being reasonable and telling the truth counts as "sounding like Netanyahu's advisers", just as doing your homework, and getting good grades counts as "trying to act White" in many bad neighborhoods.

The Middle East is a really bad fucking neighborhood.
Posted by Pastorius at 4:17:00 pm

Well, at least he does not look like he is wearing Depends.

Abbas must be wearing Depends!

Jared and Ivanka are probably fine people. But they drag Trump leftward. Get them out.

Pete,
I feel the same way.

But, realistically, I don't expect that to happen.

Sure, Jared and Ivanka are Leftward of Trump.

But that is NOT the problem here.

I understand I went on a tangent. Can someone tell me what makes Kushner more qualified than some of our career diplomats to speak with the PLO?

Absolutely nothing that I know of.

I guess I don't really care about the outcome as the PLO has repeatedly demonstrated its desire to not exist peaceably alongside Israel. What difference does it make who we send to speak with Abbas.

I know this is a crazy thing to say, but Trump used to be on the Howard Stern show somewhat often.

Howard went to Trump's wedding and I think Trump went to Howard's wedding too.

When I heard that Trump was sending Kushner to negotiate peace, I thought to myself, "This is a total Howard Stern move," by which I mean, it is an acknowledgement of the absurdity of the process and an appropriate mocking of the assholes who have perpetuated it.

You may not believe it, but I think I very well may be right on this.

I think that is right. It signals utter contempt for the PLO.

And that is what they deserve.

For too long Democrat and Republican Presidents have treated them as if they are normal members of the human race, when they are evil monsters willingly enslaved to a murderous ideology.

Very likely! Although I'd never have thought of that possibility on my own.