CALIFORNIA LURCHES EVEN FURTHER TO THE LEFT 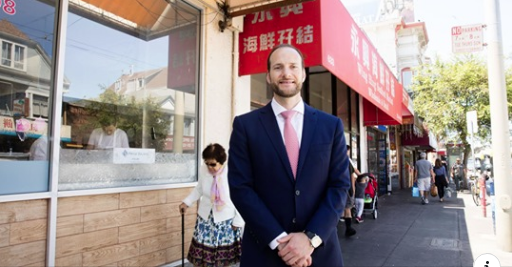 
This is what is shown for his parents when you do an internet search on this guy:

NOW, go look up each of the four named "parents."

Wait, I'll help you out a bit:

"Boudin was born in New York City.[1] His parents, Kathy Boudin and David Gilbert, were Weather Underground members.[2] When Boudin was 14 months old, his parents were arrested for their role as getaway car drivers in the Brink's robbery of 1981 in Rockland County, New York.[1][3] His mother was sentenced to 20 years to life[4] and his father to 75 years to life for the felony murders of two police officers and a security guard.[5]

After his parents were incarcerated, Boudin was raised in Chicago by adoptive parents Bill Ayers and Bernardine Dohrn, who, like his parents, were members of the Weather Underground.[6]

Kathy Boudin was released under parole supervision in 2003.[3][7] Boudin descends from a long left-wing lineage. His great-great-uncle, Louis B. Boudin,[8] was a Marxist theoretician and author of a two-volume history of the Supreme Court's influence on American government, and his grandfather Leonard Boudin was an attorney who represented controversial clients such as Fidel Castro and Paul Robeson.[9]

Boudin is also related to Michael Boudin,[8] a judge on the United States Court of Appeals for the First Circuit, and I.F. Stone, an independent journalist.[8][10]

Boudin went to St Antony's College, Oxford on a 2003 Rhodes Scholarship.[2] At Oxford, he earned two master's degrees, one in Forced Migration and the other in Public Policy in Latin America. He received his J.D. degree from Yale Law School in 2011,[11] and began work for the San Francisco Public Defender's Office as a post-doctoral fellow in 2012.[3]" - From Wikipedia

BTW, take a look at THE THING elected to the Virginia Legislature this month:

...In August 2013, Morrissey was found by police to be in his home in Henrico County with a 17-year-old girl, now his wife, who was an employee of his law office. Morrissey, the girl, and her mother, denied any impropriety. But subsequently, a Henrico County court convened a grand jury to investigate a possible improper sexual relationship between Morrissey and the girl.[13] On June 30, 2014, Morrissey was indicted on felony charges of indecent liberties with a minor, possession and distribution of child pornography, and electronic solicitation of a minor, in addition to a misdemeanor charge of contributing to the delinquency of a minor, for which conviction he served three months of a 12-month sentence. After being convicted, Morrissey resigned as a delegate at the Virginia House.[13]

According to statements from the prosecutor in court documents, Morrissey had sex with the girl multiple times in his law office in August 2013, and possessed a nude photograph of the girl, which he also sent to a friend.[13] Morrissey allegedly continued the relationship with the girl after she left his law office in August 2013, and the two allegedly shared a hotel room overnight in October 2013.[13]

Morrissey denied the charges, saying the girl came to him for advice about family problems and was being abused by her father, and that the special prosecutor was out to get him because of a personal vendetta. Morrissey said he rejected a plea bargain for a single misdemeanor in December 2013.[17] He vowed to fight the charges in court, declaring that he would be vindicated, and rejected calls to resign his House seat.[18]

Morrissey's case made national headlines in July 2014 when he used an obscenity on live television while reading a text message he claimed was planted on his phone by hackers.[18] He entered into a plea agreement in which he made an Alford plea to one misdemeanor charge and received an active jail sentence. News reports indicated that Morrissey would be eligible to attend sessions of the legislature on work release.[19]...

Much more at the link!

What a shit weasel this guy is!

I don't even know what to say in response to the Left anymore.

They have lost their minds to a degree that is not comprehensible. It's absolutely demonic at this point.