Eric Trump: ‘The Best Is Yet to Come’ 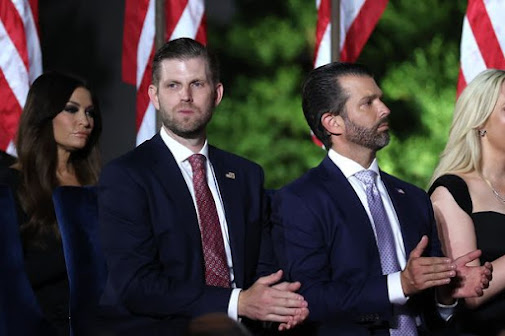 Eric Trump: ‘The Best Is Yet to Come’

“Without a doubt, the best is yet to come,” said Eric Trump in a statement before President Joe Biden was sworn into office at around noon on Wednesday.

“My hope for Americans is that we never tolerate the old norm” and “take what we have learned in the past four years and we continue to fight for the liberties and pride that allows us to be red, white, and blue,” he remarked.

Elaborating further, Eric Trump said that his family—because of the constant pressure campaign against Trump—”carried tremendous weight through unprecedented resistance and persecution.”

He added, “No president has sacrificed more. But he (and we) did it for the good and betterment of the nation.”

The Donald failed to drain the swamp...but he grabbed it by the pussy and 75 million Americans have heard the squealing and are no longer under any illusions.