Paul Sperry Says, FBI's Washington Field Office Has Opened Zero Cases On Antifa While, At The Same Time, Opening A Number of Cases On "Extremist Far Right" Organizations Like The Proud Boys and Oath Keepers 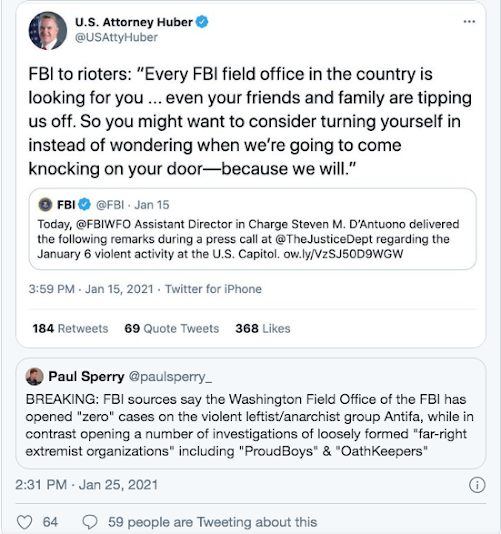 The names of the absolute abuse-of-authority-personnel at the FBI (and the entire DOJ [and intelligence community] really) is too legion to bother trying to recite enough of their names here. So let's just say they all need to be made to find new jobs, although even that won't protect us from their self-dealing anti-American, aiding-the-enemy crap.

In fact, if the lowest echelon of the FBI rose up and slew the entire upper 5 floors of the FBI, the remainder might (someday) come close to getting a fart's worth of their authority, prestige, and self-esteem back. Neither of those things will happen though, obviously, so THEY remain the problem, and we need Trump back to drain their swamp quick, fast, and in a hurry.

They can ALL #NaCl until further notice though, and they should start now, and someone ought to be along to give them a hand before they get done.

The FBI obviously can't see past its PILE of Seth Rich's, Hunter Biden's, Hillary's, DNC's, Jeffrey Epstein's, etc., etc., etc. [so I don't get a cramp typing all of the names], computers, LONG in their SECRET custody, to see their FBI computers in order to do a quick internet search and see the videos of the ANTIFA / BLM personnel changing from ANTIFA / BLM black clothes into "MAGA gear" before being
E S C O R T E D into the Nation's Capital buildings, and they suck sooooo bad at investigating any REAL problem they can't seem to pinpoint the F ers who funded them, even though they brag about it and the MSM nightly makes excuses.
F
U
all
U
s
tupid Fs.

FBI agents kneeling in submission to BLM...
All you need to know about to whom they owe allegiance-- Marxists