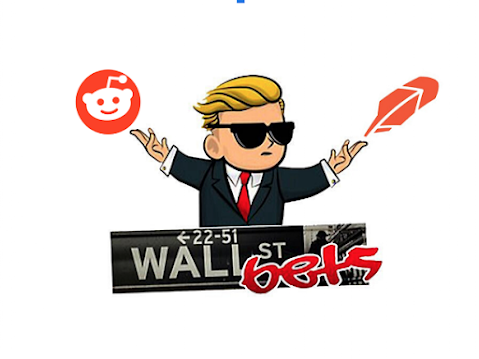 According to S3 Partners, Shortsellers Lost $14.3 Billion Just On Gamestop!

Here's the thing, Gamestop is inevitably going out of business. Its business model is the equivalent of Blockbuster right after Netflix and other streaming services started up.

So, a Reddit subgroup basically organized a Wall Street Flashmob to bid up Gamestop, as a form of economic warfare against Hedgefund managers, who were then caught in margin calls, and lost large chunks of their money.

This is a more sophisticated version of the Occupy Wall Street idea. Instead of a bunch of weed-addicted losers setting up Urban camping in Manhattan and Hollywood, some people took effective action against bottom feeder Hedge Fund managers (who control massive amounts of money) and they effectively fucked them the hell up.

Problem with this is, while it may have a seemingly elegant Robin Hood schadenfreude, it really is just a Flashmob version of exactly what the Hedge Fund managers were doing in the first place.

Excuse me for being old-fashioned, but the idea of investing is, putting money into businesses that you believe provide a viable and positive good or service. You invest to help them grow the delivery of that good and service, and to gain even more market share.

Shorting companies, and investing, as if the rising and falling of stock prices are waves to surf,  is essentially parasitic behavior.

But hey, parasites do occupy an essential niche in evolution, don't they? Heck, bacteria are a form of very positive (in many cases) parasites who live in the body, performing functions the body can't do on its own.

So who am I to criticize parasitic behavior?

There is part of me that celebrates what this Reddit subgroup did today.

But there is also part of me that recognizes it is basically vandalism and rioting by other means.

And I also recognize that this likely will not be the first and only time this happens. This will probably be followed by ever more sophisticated investment flashmobs, creating more and more destruction.

I can see this technique being used by Communists to attempt to destroy Capitalism.

And I can see the government stepping in and eliminating private investing altogether.

We will go back to the shitty old days when one would have to go through a broker to buy and sell investments.

In fact, someone ought to check and see if the CIA was in on the organization of this Investment Flash Mob, with the goal of ending the ability of private citizens to participate in investing their own money for themselves.

Reddit "WallStreetBets" Forum Counter-Buys Against a Hedge Fund Short-Selling GameStop Stock;
They Break the Hedge Fund and Even the Other Wall Street Firms Coming to the Hedge Fund's Rescue

A lot of people are applauding, because we want someone to start hurting these people. -

Shares of GameStop and AMC Entertainment Holdings soared for a fourth day running on Wednesday, forcing hedge funds to retreat from heavy losses and sparking calls for scrutiny of a social media-driven trading frenzy.

Short-seller Citron, a target for some of the individual traders who have helped drive huge gains for a number of niche Wall Street stocks in the past week, said in a video post it had abandoned its bet on GameStop shares falling.

With commentators and lawyers calling for scrutiny of the moves, Nasdaq chief Adena Friedman said exchanges and regulators needed to pay attention to the potential for "pump and dump" schemes driven by chatter on social media.

Yes, there could be some of that going on -- get people stoked to teach Wall Street a lesson buy buying up a stock ("pumping" the stock's value), then dump it once the value is near its high, leaving most of the marks holding stock which is rapidly declining in value.

But... you know, Wall Street does this kind of shit every day. The Securities and Exchange Commission (SEC) declined to comment.

GameStop's stock has surged nearly 700% in the past two weeks, upping the struggling video retailer's market value from $1.24 billion to more than $10 billion.

BlackBerry Ltd is up 185% and on course for its best month ever. Now, all of that value is illusory bubble value, but at least they made the hedge fund bleed.

STUNNING: Reddit Shuts Down WallStreetBets Subgroup — Blames Racism and Hate Speech — After Rookie Investors in General Public Make Money Causing Hedge Funds to Go Bust
Reddit shut down its WallStreetBets subreddit page on Wednesday after rookie stock market investors in the general public joined together to purchase stock in targeted companies causing a major disruption in the stock market and resulting in several hedge funds to go bust. Of course, Reddit blamed “racism” and “hate speech” for removing the community. According to The Verge, Discord has banned the r/WallStreetBets server. Reddit’s WallStreetBets subreddit is the driver of an unprecedented rally of GameStop stock, and has received a great deal of attention in the press as the stock continues to soar.

"All of this whining by Wall Street it's making me sick."

"I didn't hear one person on tv complaining about Wall Street trying to crush GameStop." pic.twitter.com/wz5ou75Pgm

Those who have spent years begging and pleading with Silicon Valley to aggressively police speech and content have single-handledly gutted one of the key initial values of the internet: empowering people to compete with corporate & political power centers. This is what you built: https://t.co/puQx3rO7G2

What an absolutely extraordinary coincidence of timing that Discord happened to decide the r/Wall Streetbets sub-reddit had too much “hate speech” to tolerate on the same day hedge fund billionaires declared them a huge threat for the crime of winning at their expense! https://t.co/qoNXa5zVOZ

How is it possible not to realize that when you empower huge corporations & the state to regulate speech and censor the internet, they’re going to use this power to advance their interests, not yours??

Even if your interests sometimes coincides with theirs, who would want this?