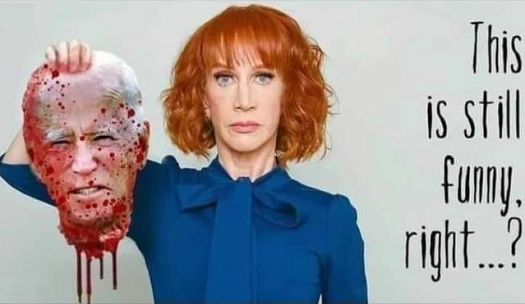 OK, listen up, all you morons! We got a bunch of new rules that have just been handed down and I've been told they go into effect today. Like, right now. Sorry for the lack of prior notice, but you know how these things are. So, let's get to it:

You all remember how "the #Resistance" was all the rage, right? All the cool kids were doing it. Well, not any more. Now it's a Bad Thing to try to oust the president. The new word is "insurrectionist", and it's a slur, not a compliment. We needed a new word, anyway, since "white supremacist" is starting to get worn out and it doesn't have the shock value it once had.

Any criticism of the Biden administration will now be called an insurrection.

The military is now good. Those brave soldiers are on our side now, right? At least, those we vet and approve of. Police, too. And military parades? Also cool now. 30,000 federal troops in the capitol should not raise an eyebrow, and any comparison to Nazis or Nuremberg rallies, which a year ago would've flooded the news cycles for days if Trump had done this, are to be discouraged.

You're going to have to drop the ACAB nonsense, too. Because we need the police to protect us from the insurrectionists. So you need to get on board with backing the blue!

Rioting is now bad. This rule was actually put in place on January 5th, but not many people knew that.

Fictional movies, plays, and books that depict the assassination of the sitting president as a good thing is now out of style. We don't do that any more. Our President should not be insulted that way. It's bad. For at least the next 4 years. Although there is an exception here for previous presidents, in particular, the last one.

FLOTUS is now beautiful again. Let a thousand magazine covers bloom. And her accomplishments, no matter how small or inconsequential, are too be praised.

I'm going to have to live under a rock for a while. What is happening to America is literally making me ill.

Same here. It's hard to want to do anything that doesn't provide escape from this hell, but I know we have to.

"Our President should not be insulted that way." Since when has it ever been possible to "insult" Senile Joe Biden?

Not too long from now this type of mocking behavior will earn you a stay at the Crossbar Inn.