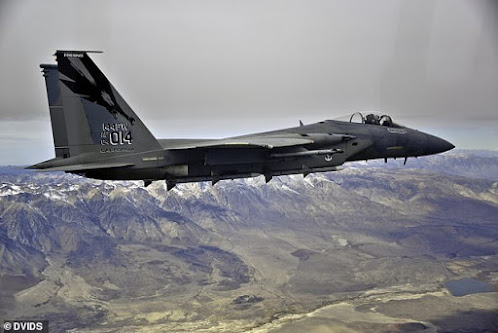 The members expected directives to ready ground troops to help state and local authorities respond to disturbances triggered by resistance to stay-at-home rules or panic over empty store shelves.

But then came an unusual order: The air branch of the Guard was told to place an F-15C fighter jet on an alert status for a possible domestic mission, according to four Guard sources with direct knowledge of the matter.

Those sources said the order didn’t spell out the mission but, given the aircraft’s limitations, they understood it to mean the plane could be deployed to terrify and disperse protesters by flying low over them at window-rattling speeds, with its afterburners streaming columns of flames.

Fighter jets have been used occasionally in that manner in combat zones in Iraq and Afghanistan, they said. Deploying an F-15C, an air-to-air combat jet based at the Guard’s 144th Fighter Wing in Fresno, to frighten demonstrators in this country would have been an inappropriate use of the military against U.S. civilians, the sources said.

The sources said the directives from Guard headquarters made their way down orally or in text messages, rather than in formal written orders, which was unusual and heightened their concerns that the jet would be used inappropriately.

That meant a pilot and launch crew had to be available to reach the Fresno base within 90 minutes or so of receiving an order to deploy the jet, the sources said.

GRTWT.
The Lieutenant Colonel gave the order.
So now we know the military is willing to use terror tactics against the citizenry.
Posted by Pastorius at 5:41:00 am