Is Fauci The Devil? Or Is He Just An American Joseph Mengele? 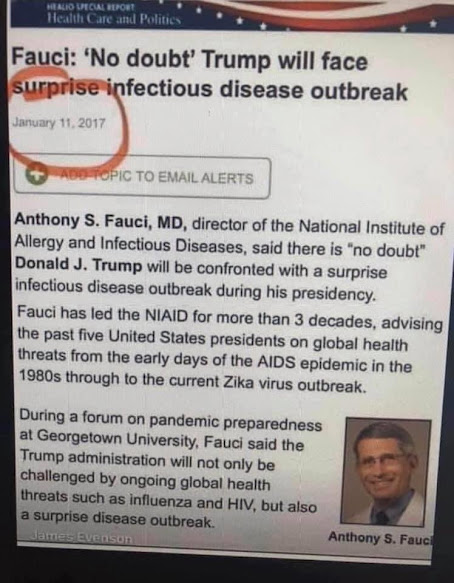 For the record, you can't forecast viral outbreaks, as one can, say, a snowstorm or a hurricane.
So, why did this fucking prick say this? Huh?

FAUCI IN 2012: "THE BENEFITS OF [GAIN-OF-FUNCTION] EXPERIMENTS... OUTWEIGH THE RISKS"

Apparently, Ace of Spades doesn't believe Fauci is the devil, saying, instead:

The only thing worse than an actual Mad Scientist is an incompetent, arrogant government-worker "scientist" who decided the stress and long hours and requirement of producing actual results of actual scientific research wasn't for him, so he took a 9-5, easy-peasy no-results-demanded civil service job.

But given the fact that the twisted little, rat-faced Beelzebub predicted the unpredictable, saying Trump would "no doubt" face a viral outbreak, it sure is strange that he also defended the indefensible:

Dr Fauci in 2012 wrote that "gain of function" research to juice up bat viruses was worth risking a pandemic: "the benefits of such experiments and the resulting knowledge outweigh the risks. It is more likely that a pandemic would occur in nature" @SharriMarkson scoop

CHECK THIS SHIT OUT: 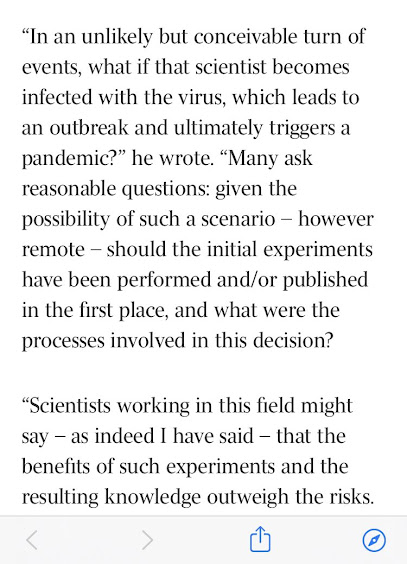 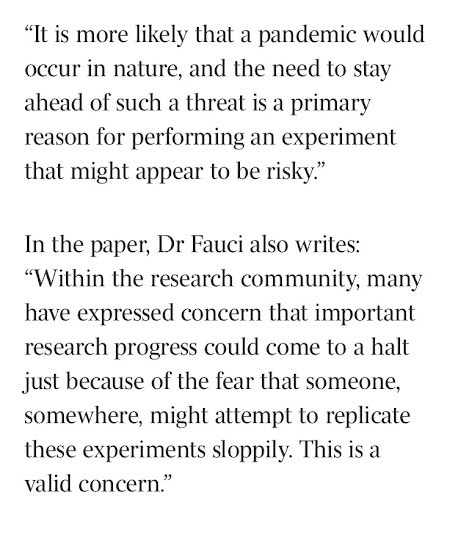 AND THEN THERE'S THIS!

The wife of a Wuhan lab researcher working on coronaviruses died of what appeared to be COVID-19 in December 2019, the leader of a State Department investigation under the Trump administration told the Daily Caller News Foundation.

It would have been an early clue that the virus could be transmitted among humans, yet Chinese authorities said that the virus was not transmissible for at least a month after they knew it was, allowing it to spread, according to David Asher, who led an investigation on COVID-19's origins and served in the State Department under Democrat and Republican presidents.

China reported in mid-January that the virus was transmissible among humans.

An individual who worked at the Wuhan Institute of Virology at the time provided the information on the lab researcher�s wife dying, according to Asher.

The lab workers appear to have been more likely to have had COVID-19 than the flu, Asher said.

"How many normal people in their 30s-40s get so sick from influenza that they have to be hospitalized? Lab workers, I am told, are almost certainly getting flu shots.

"Moreover, what are the odds that several workers -- who happen to be the researchers on enhancing the pathogenicity of COV RaTG13 and associated COVS all fall very sick together?" Asher noted, referring to coronaviruses

A source reminds me that he knew about this back in March 2020.

And that source said that numerous family members of Wuhan lab researchers had covid-like symptoms. Keep your eyes open for those shoes yet to drop.

And China covered it up.

And the US government covered it up, to rig an election.

THIS IS WHY THE BIDEN ADMINISTRATION CANCELLED THE STATE DEPARTMENT INVESTIGATION.

Where does Trump go to get his presidency back?