"I'm really coming into this as somebody who isn't, you know, part of the system, who obviously, you know, stands for the values of, you know, the Democratic Party,"

"I know how important it is to, you know, to be my own person. And, you know, and that would be obviously true with my relationship with the mayor."

"Andrew is, you know, highly qualified for this job," she said. "He's doing a, you know, a great job as attorney general, and we've spoken throughout this process."

"You know, I think, you know, we're sort of, uh, sharing some of this experience. And um, as I've said, he was a friend, a family member, and um so, and uh obviously, he's, you know, he's also had an impressive career in public office."

"It's really, you know, it's not about just the Kennedy name," she said. "It's about my own work and what I've done with those values."

She refused to discuss details of her personal wealth and again said she would file all legal disclosures publicly only if she is selected for the seat.

So what? Just substitute the "you knows" for "uhs" and you have Pres Elect Obama, and look where he is? Besides, as we all know, a double standard exists. She's just thinking her answers through, being nuanced and intellectual, much like O.

I can't quite tell what Caroline reminds me of, a Bajoran: 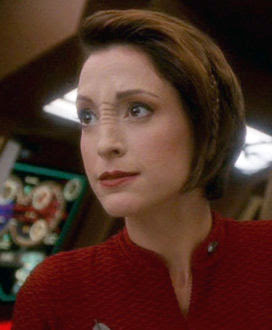 But my Dad thinks she's more like a Serilian, who actually maintained diplomatic ties with the Bajorans:

A little unbecoming, I'll admit that. And how my Dad remembered the Serlians, I'm not really sure.

But look at her face, isn't she a bit creepy? Look at the upper bridge of her nose:

Slightly inhuman, indeed. But then Pres Kennedy is always spoken of as a super being, with many false attributes that sound superhuman as I mentioned in an earlier post and deserves repeating:

Was he himself the Father Alien of another Planet?

And here she is with THE HIVE:

Oh the cold, calculating terror in their eyes.


MORE STAR TREK ALIENS AT GENYCON.BLOGSPOT.COM
Posted by Anonymous at 4:27:00 am

I wonder what diet Caroline uses to keep her girlish figure. She should come out with a diet book.

Also, I would like to know what books she recommends that I read. I never know what book to buy unless someone like Caroline suggests something.

Also, it would seem she might have some tips on how to please my partner. You know, you'd think, anyway.

Well, if she produced ET then she's obviously a child molestor.

It's true, she is part alien, but on her mother's side. Jackie was 1/4 Venutian. I just posted about the Kennedy alien connection on my blog as well, apocalypsepopsicle.blogspot.com

keep up the fight