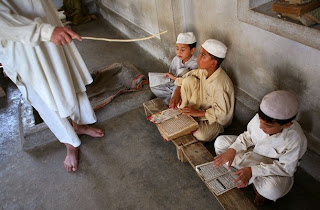 The president appealed to the Indian government to provide more educational opportunities to Maldivian students, in particular at leading universities, to prevent them from studying at extremist institutions.
Back in Male’, Mohamed Zuahir, press secretary at the president’s office, has said that some young people do “end up in places unknown to their parents” which is why the president made the appeal to the Indian government.
The solution, he said, was to create more educational opportunities both here and abroad as well as to diversify education so that students have the option of getting a religious education in the Maldives.
Dr Mustapha Lutfi told Minivan News on Monday that students who do not have the opportunity to study in other institutions or do not get scholarships may end up in charitable organisations such as madrassas.
He added he hoped the growth of more educational opportunities, including religious studies and subjects in Arabic would prevent students from studying at madrassas in the future.
But, he said, “Some people like studying religion and they like studying religion in other countries.”
Continue reading here
Posted by Dhivehi Resistance at 6:32:00 pm