North Americans should take special notice of this religious edict encouraging violent Jihad in support of the Palestinian terror forces. A "Fatwa" is universal and can be interpreted as justifying acts of terrorism against the United States and Canada. With thousands of radical Islamists residing on the continent our security services should be on high alert in anticipation of operations carried out by Jihadists on our soil. 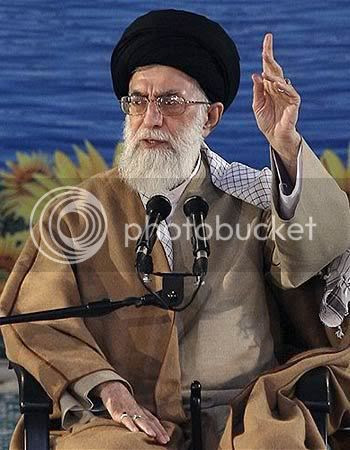 Supreme leader issues religious decree in support of Palestinians; parliamentarian likens Israel's actions in Gaza to those of Hitler

Iran's Supreme Leader Ayatollah Ali Khamenei issued a religious decree to Muslims around the world on Sunday, ordering them to defend Palestinians against Israel's attacks on Gaza, state television said.

"All Palestinian combatants and all the Islamic world's pious people are obliged to defend the defenseless women, children and people in Gaza in any way possible. Whoever is killed in this legitimate defense is considered a martyr," state television quoted Khamenei as saying in a statement outlining the fatwa.

Khamenei also criticized some Arab governments for their "encouraging silence" towards the Israel's raids on Gaza. "The Zionist regime must by held accountable by Islamic governments. The heads of this regime must be held personally accountable for these crimes and the ongoing siege," the religious leader said.

Accordingly, a state TV report late Saturday quoted President Mahmoud Ahmadinejad as saying Iran will stand by the Palestinians.  He also tried to garner greater support for the Palestinians by waging an informal PR campaign against Israel among Arab states.

"Israel is trying to take revenge against the Palestinians, but with God's help, it will be defeated," the president said to his Syrian counterpart, Bashar Assad. Ahmadinejad also spoke with Secretary General of the Islamic Jihad Ramadan

Abdulla to express his support for the Palestinian group. 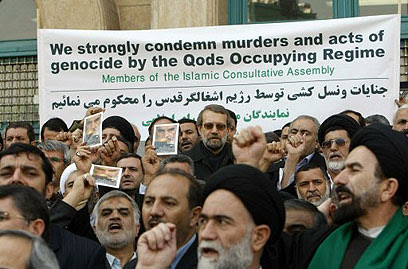 Alaeddin Borujerdi, a legislator and head of the Iranian parliament's National Security and Foreign Policy Committee, endorsed these sentiments early Sunday when he compared Israel's aerial attack on Gaza to Nazi crimes.

"The Zionists are doing what Hitler did during World War II, when they attacked innocents in a barbaric manner," Borujerdi told the state-run Iranian news agency IRNA, during a pro-Palestinian rally in the nation's capitol, attended by several Iranian parliamentarians.

Israel's air strikes in Gaza on Saturday and Sunday have targeted strategic Hamas-related targets, in an attempt to put an end to unceasing rocket fire launched by Hamas and other terror groups in Gaza against Israel towns.  Of the some 270 Palestinians killed, most were members of the Gazan security forces.

But such facts don't seem to affect the anti-Israeli outcry in Iran.  All across the country, masses are gathering for solidarity rallies, with the encouragement of the Islamic government.  Ali Larijani, speaker of the Iranian parliament, attended one such rally, held in 'Palestinian Square', in Tehran.

Larijani accused Israel of undertaking the attack because of political motivations, ahead of upcoming Israeli elections. But he also expressed anger at Israel's neighbors.

Arab nations standing silent in the face of Israel's operation "are making a strategic mistake because they think that they can change the situation on the ground in their favor," he said.

Echoing Khameini and Larijani's hints, Borujerdi called Egypt out by name and censured the Arab nation for being the primary obstacle to Iran's attempts to send aid to Gaza. "Iran asked Egypt to allow aid to be sent by sea or air and received only preliminary agreement," he said.

Reuters and AP contributed to this report

Neither unexpected nor surprising but troublesome to say the least.

Why should Sunnis heed the call of those Shia usurper dogs?

Because they may hate each other, but we're their common enemy of course.

The "Arabs" that all Arabian Country could careless about. All would not Urinate on them if they were on fire. Not much mentioned about Hamas shooting rockets into Isreal, killing innocent civilians. Way to go Liberal Press.