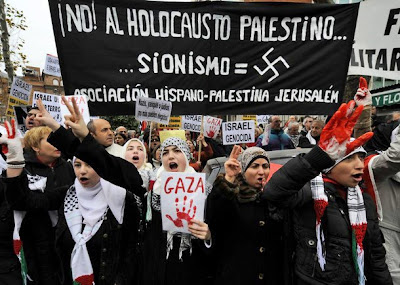 Six clichés you are likely to hear constantly in the coming days, and why they're false

1) "Israel's response in Gaza is disproportionate"Since when is war a mathematical equation? The basic objective of any warring party is to inflict maximal damage on the enemy while minimizing its own casualties. Was there anything proportional about the US war in Iraq? Or about Iraq's invasion of Kuwait for that matter? Or about Russia's recent war against Georgia? Israel is doing exactly what any other country has done in the past. This is how war works.Would a British citizen complain that "too few" British soldiers are being killed in Iraq? Probably not.And on a more elementary note: Palestinian military inferiority is not an indication of moral superiority. Palestinian insistence on resorting to violence despite this military weakness is an indication of poor judgment perhaps – yet it is by no means an indication of moral virtue. Being militarily weak does not make the Palestinians right.2) "But Qassams don't kill"Actually, Qassams do kill. Not too often, perhaps, but dozens of Israelis were killed and wounded by rocket fire in recent years. Moreover, at this time the Palestinians are firing long-range Grad rockets with even greater explosive power. Such rockets killed 2 Israelis Monday.Yet beyond the casualty figures, the psychological damage caused as result of living under an ongoing rocket threat is immeasurable. Would anyone in the West agree to have their family live under constant rocket attacks and be regularly woken up by sirens in the middle of the night? Would anyone living under such conditions appreciate being told that "these rockets don't kill?" Probably not.3) "It's all because of Israel's siege. Israel should allow aid into Gaza."Israel has allowed goods into Gaza regularly throughout the "siege". Palestinians have been able to complement these deliveries with supplies smuggled through hundreds of tunnels (of course, they would likely be able to bring in even more food had they not used the tunnels to smuggle in missiles.).The day before operation "Cast Lead" got underway, Israel allowed dozens of trucks carrying aid to enter the Strip. On Tuesday, another 100 trucks – double the normal number –are expected to enter Gaza after Defense Minister Barak approved the move.

In short, Israel is allowing aid into the Strip (but guess who has kept Gaza crossings mostly closed thus far? That's right, Egypt.)

4) "Why didn't Israel just agree to renew the Gaza truce?"First, what truce? Terror groups continued to fire rockets throughout the lull, even if somewhat infrequently, and even if the world didn't seem to care too much. Nonetheless, Israel clearly declared that it is interested in extending the truce. Our top officials made it clear time and again.Yet Hamas leaders clearly declared that the truce has ended on December 19th, and proceeded to bombard southern Israeli communities with dozens of rockets daily. In short, it is no wonder that even the Egyptians are blaming Hamas this time.5) "But Hamas was elected democratically – why can't Israel accept it?"Although Hamas won the Palestinian elections, it took Gaza by force, in the process hurling rival Fatah members down to their death from high-rises and shooting others in the knees with the declared aim of maiming them. Some democracy.In any case, Israel in fact "recognizes," de facto, Hamas' rule in Gaza, which is precisely why it is justified in attacking the Hamas-ruled Strip, recognizing that it is indeed being governed by a terror entity. Israel did not launch the operation because Hamas is in power there – rather, it did so because Hamas is a terrorist organization that has deliberately targeted civilians with thousands of rockets over the past 8 years.6) "Israel is targeting civilians"You mean to say that "one of the most powerful armies in the world" has been bombing Gaza for days, deploying massive air power, dropping hundreds of bombs, and ultimately killing a grand total of 50 civilians or so in the "most crowded place on earth?"

There are two options here: A) The Israeli army is not targeting civilians, or B) Israeli pilots suck. We tend to go with option A.Indeed, Israel goes to great lengths to avoid civilian casualties, by deploying precise ammunition and specialized techniques. In fact, nobody in the world does this better than the Jewish State.

«Yet beyond the casualty figures, the psychological damage caused as result of living under an ongoing rocket threat is immeasurable.»