Did Egypt sell out Hamas? 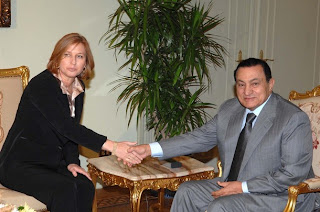 Hamas is accusing the Arab nations in general, and Egypt and Fatah in particular, of having sold it out by not warning that an Israeli attack was imminent.

A Hamas official told The Jerusalem Post that the reason why security installations in the Gaza Strip had not been evacuated before the attack was because the Egyptians had assured his movement that there would be no Israeli attack in the coming days.

"Only hours before the attack, the Egyptians told our representatives that they were under the impression that Israel would not launch an operation," the Hamas official said. "We believe the Egyptians deliberately deceived us because they had given Israel a green light to attack."

Another Hamas official told the Post that Abbas and his top aides had long been urging Israel to bring down the Hamas government so that they could return to the Gaza Strip.

The official pointed out that both Abbas and the Egyptians had announced shortly before the Israeli attack that they were engaged in attempts to resume "national dialogue" between Fatah and Hamas.

"The Egyptians even made it clear to us that they had convinced Israel not to attack the Gaza Strip," he said. "Abbas also wanted to reassure Hamas by talking about his intention to renew the reconciliation talks with us."

Taher a-Nunu, spokesman for the Hamas government, accused "third parties" of involvement in the Israeli effort to overthrow Hamas. However, he refused to name the third parties.

A Hamas minister later said that the spokesman was referring to Egypt and the PA.

For once, there might actually be something to the accusation. Consider this.

While Barak was working out the final details with the officers responsible for the operation, Livni went to Cairo to inform Egypt's president, Hosni Mubarak, that Israel had decided to strike at Hamas.

In parallel, Israel continued to send out disinformation in announcing it would open the crossings to the Gaza Strip and that Olmert would decide whether to launch the strike following three more deliberations on Sunday - one day after the actual order to launch the operation was issued.

"Hamas evacuated all its headquarter personnel after the cabinet meeting on Wednesday," one defense official said, "but the organization sent its people back in when they heard that everything was put on hold until Sunday."

Would Mubarak sell out Hamas? You bet he would.

Cross-posted to Israel Matzav.
Posted by Carl in Jerusalem at 11:06:00 am

Poetic justice on top of everything else. Gotta love it. As you pointed out in an earlier post, Carl, Hamas was already accusing Egypt of "giving Israel the green light". So now they're complaining because they took the word of a government they didn't trust in the first place? And whose Intelligence Chief had openly stated would welcome the end of their regime? What, they assumed their Muslim "brothers" would never lie to them?

Now it looks like Israel is indeed determined to see this well-planned assault through to the end, and let the world scream its fool head off.

Well they might as well sell out. Israel killed 40 tunnels where arms etc was being smuggled through from Egypt. Either Egypt facilitated that or was powerless to stop it, so either Israel exposed them to the world or helped them with an internal problem. They save face by a sell out either way. Israel is doing a good job of kicking ass. Long overdue. Rock on Israel!!

iam so proud of the Egyptian regime a lot