News from the Front, both in Gaza & around the world 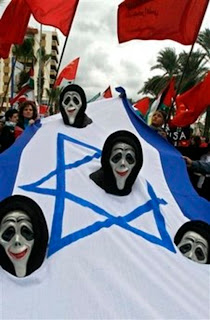 2 Gaza pieces from Atlas:
the first --
NEWS FROM THE FRONT IN ISRAEL
Small footnote - Israel was relentlessly attacked with missiles and mortars. Here is the latest from Naomi Ragen:
News from the Front

1. Eighty missiles have been fired by Hamas into Israel since this morning.
A missile hit a car in the center of Ashdod. Two young women were critically
injured, and three others wounded. A long range missile fell in Ashkelon,
killing one and injuring 9. Two of those injured are Arabs, a Palestinian
construction worker from Hebron, and a Bedouin from Rahat. They were taken to
Barzilai Hospital in Ashkelon. "Rockets don't distinguish between blood and
blood," said the Hebron man's relative. The doctor caring for them is Jewish.
The hospital has moved it's patients underground and evacuated all but the most
seriously ill patients, fearing further attacks. A Palestinian woman from Gaza,
a cancer patient, cared for in Israel, is now well enough to go home, but she
can't because Gaza's gates are closed. Hamas didn't have long range missiles
until Israeli politicians (the same ones who are now going to war) agreed to the
disengagement and the ceasefire. How many soldiers and citizens will now die for
these critical misjudgments?


2. A soldier waiting in his tank on the border of Gaza, ready to roll in:
"We came from the North. We are happy to be here to defend our people in the
South."


3. Ashkelon's streets are empty tonight. Children in the affected areas
will not be returning to school.


4. A Bar Mitzvah party in Sderot was celebrating on the roof of a building
when a kassam flew right over their heads, crashing into the building next door.
The celebrants continued to rejoice. The boy read his haftorah. Only afterwards,
will he be going up North for a vacation. The people of Sderot are filled with
the different spirit. They are willing to suffer the reprisals of the Hamas if
only the IDF does it job and makes their lives safer in the future. Unlike other
towns under fire, their streets are full.


5. The despicable demonstrations in London talking about a "holocaust" in
Gaza show once again it has become Londonstan. I pity the Brits.


6. Israeli television continues to do its best for our enemies,
interviewing a doctor from the hospital in Gaza about shortages and an influx of
patients. Let him complain to his government, who instead of medical supplies,
bought rockets to log at innocent civilians across the border. The bombing of
Dresden also killed many people. Did the Allies broadcast pictures and interview
Nazi doctors to demoralize their soldiers and civilians from fighting? The
people responsible for editing the news should be fired.

the second -- more of a photo essay of anti-Israeli protests world wide today. You really need to hop over there to do it justice. (cribbed the picture from that one I did)

Woe is me ... pity those poor dead annihilationists
Hamas Charter (1988) The Charter of Allah: The Platform of the Islamic Resistance Movement (Hamas)

"Israel will rise and will remain erect until Islam eliminates it as it had
eliminated its predecessors. The Islamic World is burning. It is incumbent upon
each one of us to pour some water, little as it may be, with a view of
extinguishing as much of the fire as he can, without awaiting action by the
others"

The media is depraved. In reviewing the media coverage of Israel's counter defensive in Gaza it is impossible to digest the media's relentless handwringing over Jewish people defending themselves and their right to exist against unapologetic jihadis who vow to destroy the Jewish state. Ironically, a free media would cease to exist if the world press got their wish. Their heads would be hacked off if they spoke against the caliphate or worldwide jihad and yet they recklessly aid and abet the death of the greatest civilization in the history of mankind, the West.
While the Jews mop up after the world's willful stupidity, they relentlessly clubbed into submission/extinction. What part of 9/11, 7/7, 3/11, ll/26 don't these dhimmis understand?
This is the media's fault. They have deceived the public. The blood is on their guilty hands. Special honorable mention to the leftarded academics as well for brainwashing our kids leaving incapable of distinguishing between good and evil.
You must it admit - good old fashioned Jew hatred sure can bring the world together mighty quick.