While the Obama administration said it is committed to gun rights, a gun control advocate has spilled the beans, saying Obama is using stealth to work on firearms restrictions.

The Washington Post did a story on Steve Croley, the White House gun control czar. Croley is considered to be an expert on regulation and tort law. His approach to gun control appears to be a regulatory one.

According to the article, Jim and Sarah Brady visited Capital Hill on March 30, the 30th anniversary of the assassination attempt on Ronald Reagan; to push for a ban on "large magazines."

The couple reportedly were meeting with press secretary, Jay Carney, when, according to Sarah Brady, the President came in. She said the President told her he wanted to talk about gun control and "fill us in that it was very much on his agenda."

She went on to say Obama told her, "I just want you to know that we are working on it. We have to go through a few processes, but under the radar."

The statement reinforces an article in the Huffington Post describing how the administration is exploring ways to bypass Congress and enact gun control through executive action.

The Department of Justice reportedly is holding meetings discussing the White House's options for enacting regulations on its own or through adjoining agencies and departments. "Administration officials said talk of executive orders or agency action are among a host of options that President Barack Obama and his advisers are considering. "

Dudley Brown, Executive Director of the National Association of Gun rights and Colorado's Rocky Mountain Gun Owners, says he is not surprised to hear the President is trying to unilaterally enact gun control regulations. "It’s clear that President Obama and Sarah Brady have been using the ATF to enact what they can’t get through Congress: a ban on the importation of self defense shotguns, new reporting requirements for multiple rifle sales, and the attempt to smuggle firearms across the border to Mexican gang members are just a few examples." 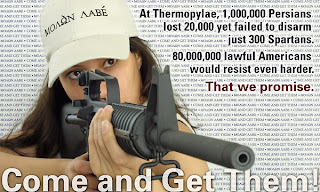 Hi Midnight.
I remember reading about a month ago something similar that he's aiming at going behind Congress their back to regulate gun controll.

MR, thats an awesome picture, I would like use it on some tshirts I have around the house. who has copyrights to it, do you know?

No, I don't remember. I found it a couple years ago and have kept it in my stock photo file since.

How are you Blogger Formerly Known As In Mary's Image? If you changed your email as well shoot me a note so I have the new address!

aww comeon now MR, you know I wouldn't leave ya completely! My email is the same ;)
Btw,if I send you a picture of me in that t-shirt, would you consider me for Infidel babe of the week? LOL