A gang of four Muslim men launched a horrific attack on an RE teacher because they did not approve of him teaching religious studies to Muslim girls, a court heard yesterday.

Gary Smith, 28, was left with facial scarring, both long and short-term memory loss, and now has no sense of smell.

He became depressed after his face was slashed and he suffered a brain haemorrhage, fractured skull and broken jaw following the attack. 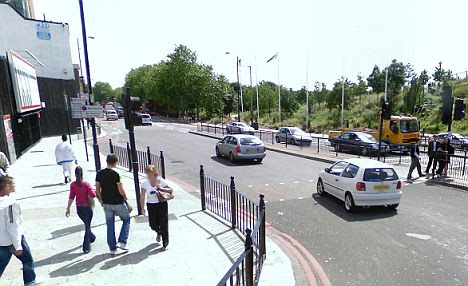 Scene: Burdett Road, East London, where the gang ambushed Mr Smith
The men were said to have attempted the assault several times, ‘lying in wait’ for Mr Smith before successfully ambushing him on his way to work on July 12 last year.

The gang was recorded planning the attack by detectives who had bugged defendant Akmol Hussain’s car over an unrelated matter.

They were taped saying they wanted to hit or kill the teacher just because he was the head of religious studies at the Central Foundation School for Girls in Bow, East London.

In one recording Hussain said: ‘He’s mocking Islam and he’s putting doubts in people’s minds . . .  How can somebody take a job to teach Islam when they’re not even a Muslim themselves?’
Posted by Pastorius at 1:47:00 am

I hope they lock these people up and throw away the key.

True, faithful, followers of their profit Mo'. Every single true follower of their profit MUST applaud their behavior in conscious, or they are not a true follower per their scripture. Sure some may express a false outrage in deference of Mohammedanisms 'peaceful' facade, but they MUST agree in heart otherwise they are false disciples of the profit.