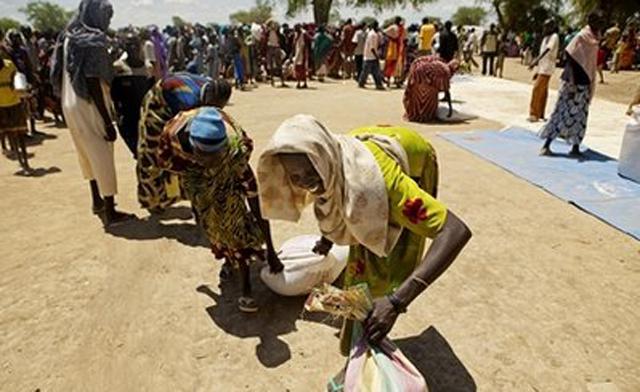 (Al-Arabia).Alel Bol fled with four of her six children when armed northerners on motorbikes roared into her home in Sudan’s contested Abyei border region and, she said, bombs started falling from the sky.

On Friday, she was still waiting for news of the other two children as she and tens of thousands of her compatriots took refuge in villages inside south Sudan, many sleeping on the bare earth under trees, plastic sheets and torn tent fabric.

About 80,000 people have fled since the north Sudanese armed forces seized oil-producing Abyei almost a week ago, a southern official said, doubling previous estimates of the displaced, according to Reuters.

“I saw the attackers ... I saw their guns. They were even bombing from the sky,” Ms. Bol said beneath the baking sun in Turalei, about 130 kilometers (80 miles) away from Abyei town. “I made it here with four of my children, but two are missing.”Both Sudan’s mostly Muslim north, and the south, where most follow Christian and traditional beliefs, claim Abyei—a battleground in a north-south civil war that ended in 2005.

The north’s move last week sparked an international outcry and raised fears a land-grab could return Sudan to full-blown conflict, which could have a devastating impact on the region by sending refugees back across borders and creating a failed state in the south.

The attack came at a highly sensitive time for Sudan, just seven weeks before south Sudan is due to secede as an independent country, taking its oil reserves with it.Southerners voted for independence in a January referendum agreed under the 2005 peace deal that ended the last civil war.

Thousands of men, women and children, many of them without possessions, crowded into Turalei in the south’s Twic county.Entire villages have been emptied after widespread looting and shooting broke out following the advance of northern armed forces into Abyei, international organizations say.

The United Nations, meanwhile, said Friday that it will send a representative to Sudan to assess the country’s human rights situation, including the consequences of recent clashes in Abyei.

Mohammed Chande Othman, the UN’s independent human rights expert, said in a statement that he “will focus in particular on the arrests and detentions in the north (and) the armed confrontations that have taken place between the (southern army) and armed militia groups.”

He added, according to Agence-France Presse that during his May 31 to June 8 visit he will assess “the ongoing conflict in Darfur and the deteriorating situation in Abyei.”

Islam is spread by deception and the sword.. We shall overcome it with the sword of truth.

Mohammed Chande Othman, the UN’s independent human rights expert, said in a statement that he “will focus in particular on the arrests and detentions in the north (and) the armed confrontations that have taken place between the (southern army) and armed militia groups.”


I have repeatedly proposed this idea.

1) Make a law which declares that advocating Sharia/Jihad is sedition which is punishable by death or deportation.

2) The FBI creates a list of the worst 1000 Jihad-advocating potential terrorists. People who are already associating with one another and proposing violence against Infidels. And, you deport them.

3) The result anger from step one will be that you will smoke out 1000 more people who will be willing to wage Jihad against the Infidel.

4) you round them up and deport them

until they learn the lesson that we will not tolerate their seditious behavior. - Pastorius

«American Jewish groups are fighting a proposed ban of Sharia law in the state of Oklahoma.»

«The AJC filed a brief last week with the US Court of Appeals arguing that the ban is an attack on religious freedom.»

Jewish Arthur Pisk - Head of the Ordnungsdienst.(OD) in charge of
Westerbork concentration camp.
All of the OD Westerbork camp officials under Pisk were also Jews.

Not much has changed in human nature.