News that President Barack Obama arrived in Hawaii this weekend to join his wife Michelle and daughters Malia and Sasha in time for a Christmas holiday has been covered by news media worldwide. 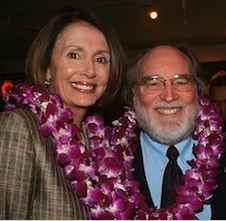 The first family and their friends have been enjoying a reclusive 17-day holiday vacation in beach front homes in Kailua, Oahu.
But another powerful politician is here for the holidays as well, albeit on another island and with less media attention.
Congresswoman Nancy Pelosi, D-CA, who served as Speaker of the House and is now head of the House minority, is once again spending her Christmas at the exotic Four Seasons Resort Hualalai at Historic Ka’upulehu in Kona on the island of Hawaii.
Pelosi reportedly plans to spend her Christmas Eve at midnight mass in St. Michael’s Catholic Church in Kailua-Kona.
Pelosi spent the last two Christmas holidays in Kona at the same hotel in an elaborate suite that rents for $10,000 a night.

Term Limits.
Speaking Engagement Caps for the Year once you are elected and for all perpetuity
Complete Ban on working for any entity which has a registered lobbyist
THEN we will get people who wish to serve
Posted by Epaminondas at 12:26:00 am

Without a cap, there will always be money chasing influence.
No matter how small you make any federal govt it will be the largest institution of any kind in this nation.

Cost of a B-2?
Nuclear Sub?
Drilling leases?