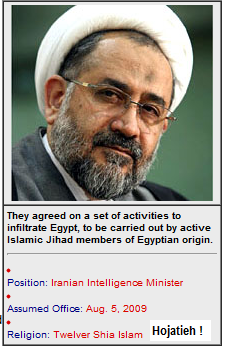 LONDON — A leading Arab analyst asserted that Teheran was promoting an Al Qaida presence in Egypt following the ouster of President Hosni Mubarak in February.
The analyst, Huda Husseini, asserted that the campaign was being directed by Iranian Intelligence Minister Heydar Moslehi to promote Teheran’s interest in the Arab world.
“Egypt appears very important in this regard,” Husseini said.
In an analysis for the Saudi-owned A-Sharq Al Awsat, Husseini reported meetings between Moslehi and a leading Al Qaida operative. She said the Iranian minister met Atiya Allah Al Libi in May in Teheran, two months before the Al Qaida commander was assassinated in Afghanistan.
“They agreed on a set of activities to infiltrate Egypt, to be carried out by active Islamic Jihad members of Egyptian origin,” said the analysis, published Nov. 14. “The aim was to promote Islamist movements, which would then support Iran’s regional policy.”
Under Mubarak, Egypt accused Iran of seeking to establish an insurgency base that included Al Qaida and Hizbullah. Over the last two years, Egypt arrested more than 50 suspected Hizbullah and Al Qaida agents accused of being funded and directed by Teheran.
Many of the Al Qaida agents sent to Egypt were released by Teheran in 2011. Husseini said Iran also released Libyan detainees on condition that they help in operations to undermine Egyptian stability.
During the May meeting, Al Libi was said to have been promised money to fund the transfer of Al Qaida agents to Egypt. The analysis said the Al Qaida operatives were directed to enter Egypt, establish operational cells and conduct an insurgency campaign.
“At the meeting, it was agreed that the funds should be used to purchase documents for those who had been recruited earlier in Egypt, in order for them to be sent to training camps, particularly in Sudan, and to be provided with equipment and weapons — explosives, machine guns, RPG missile-launchers and so on,” the analysis said.
Husseini identified some of the Al Qaida returnees as Hussein Shamit, linked to the assassination attempt on Mubarak in Ethiopia in 1995. Another member sent by Iran was Mohammed Shawqi Al Islambuli, a senior member of Gamiat Islamiya.
Another Al Qaida operative who infiltrated Egypt was identified as Hisham Ramadan, who spent years in Afghanistan.
“If Arab countries are not attacked by Israel, they will certainly be attacked by Iran, and Al Qaida is ready to help,” the analysis said.

What’s it gonna take for some people to wake up?
Posted by Epaminondas at 9:48:00 pm

What’s it gonna take for some people to wake up?