The End Of Blogging? 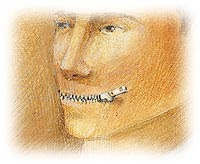 Honestly, nothing surprises me now.

The conservative and liberal blogospheres are unifying behind opposition to Congress’s Stop Online Piracy Act, with right-leaning bloggers arguing their very existence could be wiped out if the anti-piracy bill passes.

Some have asserted that the controversial measures would criminalize pages and blogs that link to foreign websites dedicated to online piracy. In particular, this has concerned search engines like Google, which could face massive liability if some form of the bill passes, some say.

“Of course, restrictions of results provided by Internet search engines amount to just that: prior restraint of their free expression of future results. Google and others, under SOPA, are told what they can or can’t publish before they publish it. Kill. The. Bill,” conservative blogger Neil Stevens argued at RedState....

And silencing voices will rid the world of Islamophobia, right? **snerk**
Posted by Always On Watch at 7:08:00 pm

you want something to become FUBAR??? just get politicians involved.

they can fuck up a rock with a rubber hammer.....

[Politicians] can fuck up a rock with a rubber hammer.....

That prompted some wry laughter from me.