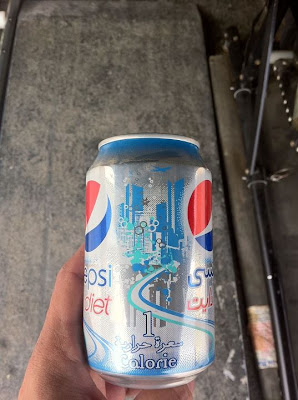 Those Pepsi cans were manufactured in Dubai.

Is the image a rendering of the Twin Towers? Evaluations on that matter have been mixed.

So yesterday I was in the chow hall on my Forward Operating Base here in Afghanistan, and, as usual, I grabbed a diet cola to go with my meal. The Diet Pepsi served in our chow hall is not from the United States. It is manufactured in Dubai by Pepsi Arabia and says so right on the can.Yesterday, for some odd reason I looked–I mean I really LOOKED–at the subtle “clip art” on the background of the can.And I did a double take. I couldn’t believe what I was seeing… I examined the can for several minutes while my food grew cold, wondering if my eyes were deceiving me.

But there was no getting around it. To either side of the Pepsi logo, there was an image of a jet airliner over tall buildings. Looking at the image, I couldn’t help but think it alluded to 9/11.Three other soldiers were sitting with me at my table. One of the other soldiers asked what I was looking at so hard. Instead of answering, I handed him the can and said, “Look at the artwork on this can. Do you see what I see?”

He looked. His eyes grew wide. He turned the can from side to side. The other soldiers at the table looked, too. None of us said anything. The phrase “9/11″ never passed from our lips. We could LOOK at each other and understand we all saw the same thing, a “sneaky allusion to 9/11.”

Honestly, get over yourself.