Is Michelle Obama's spending 'spiralling out of control'? First Lady 'insisted on $4m trip to Hawaii when her husband wanted local vacation'
Barack Obama 'wanted trip to Camp David, Maryland'
But his wife 'didn't want to disappoint their daughters'
'Had a pre-holiday shopping spree': National Enquirer

Michelle Obama insisted on a pricey holiday to Hawaii when her husband would have rather gone to a presidential retreat, according to reports.

She allegedly wanted the taxpayer-funded $4million trip when Barack Obama sought instead to make the short trip to Camp David in Maryland.

Political sources told the National Enquirer that the 47-year-old’s spending is rocketing and she even went on a shopping spree before the Hawaii trip. 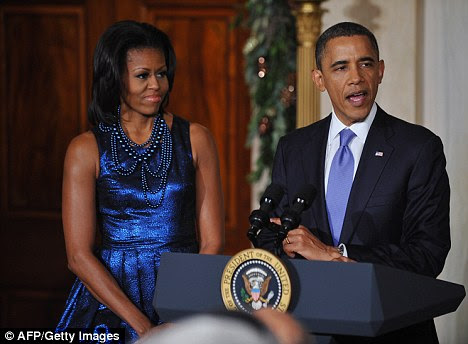 ‘The President’s advisers have told him that Michelle’s spending has spiralled “completely out of control”,’ one source told the National Enquirer.

‘Barack read his wife the riot act, but his words fell on deaf ears. Michelle said there was “no way” she was going to disappoint her daughters.’

The First Family has already attracted criticism as their annual vacation in Hawaii this year is likely to be their most expensive ever.

The President will travel separately to his family this time because he wants resolve the payroll tax cut issue before leaving Washington D.C. Holiday: Security keep watch behind a house overlooking the beach at Kailua Bay not far from where Mrs Obama and her daughters are staying in Kailua, Hawaii 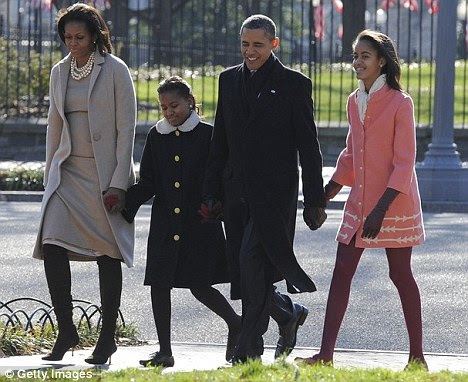 He is expected to travel later this week and was seen buying Christmas presents on Wednesday at PetSmart and Best Buy in Alexandria, Virginia.

Mrs Obama took Malia and Sasha to MA'O Organic Farms in Hawaii for pizza earlier this week where they were joined by healthy eating advisors.

Mr Obama himself was seen buying pizzas from the Del Ray Pizzeria back in Alexandria as he spends time at home without his family. 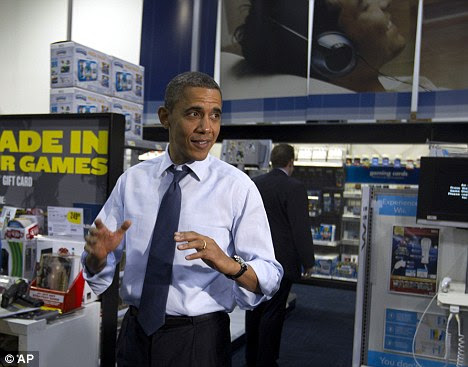 Presents: President Obama shopped for Christmas gifts for his family, who have already flown to Hawaii, at Best Buy on Wednesday in Alexandria, Virginia

The bill for the trip went up last week when Mrs Obama decided to take Sasha and Malia herself while her husband tries to save the U.S. economy.

'Barack read his wife the riot act, but his words fell on deaf ears. Michelle said there was "no way" she was going to disappoint her daughters'

His flight was estimated by the Hawaii Reporter as the largest expense of the holiday trip, which will cost more than $4million in total.

It is not yet known exactly when President Obama will fly out to Hawaii, with the death of North Korea's leader Kim Jong-Il likely delaying his trip further.

Hi Midnight.
How about the story that they flew over Bo Obama from Hawai for a photo shoot with 'daddy' at petsmart?

The National Enquirer, a tabloid, isn't always a reliable source.

That said, let's think about this for a moment:

...their annual vacation in Hawaii this year is likely to be their most expensive ever...

Here's my take on the matter as whole:

Michelle Obama realizes that her husband may well not be re-elected in November 2012. If he loses, this may well be her last chance for such a luxurious Christmas vacation. Lame duck Presidents usually hold back if they lose.

I have a similar theory about MO's spending sprees in general: Get it now -- before it's too late. In other words, she's feathering her nest. Hell, I'll bet that they're stocking up on their children's clothes too.

Frankly, I cannot imagine that BHO wanted to vacation at Camp David. Recreational drugs flow freely in Hawaii (guide books have the info as to where to buy cocaine -- I'm not kidding!), but in the Catoctin Mountains, where Camp David is located, only meth is available. Just sayin'.

Well, we would not want to disappoint the little angels and their self-entitled mother. We taxpayers are really lucky to be able to pay for her extravagant decisions.