A metaphor I'm sure we'd rather not be bothered with 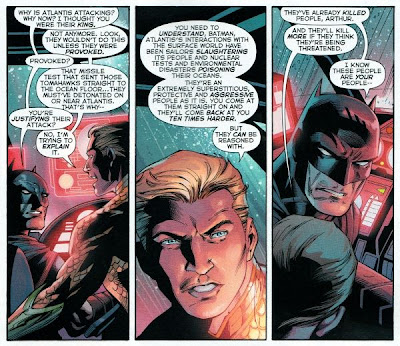 The leftist British comics/films site of Bleeding Cool posted this item asking "Is Atlantis Meant To Be Israel?" in reference to a crossover story DC Comics is publishing taking place in both Aquaman and the Justice League. Since this is written by the awful, overrated Geoff Johns, the same one who wrote the victimology story for the sake of Islam in Green Lantern, I wouldn't trust this particular item to do any better. Aquaman is made to describe "his people" as "superstitious, protective and aggressive", and 2 of those 3 words do not make me feel particularly comfy. Nor in fact does the site's suggestion that:


Or course, another reading may see Atlantis as Palestine. Or Iran. Or the USA itself. Cold War aspects given a new relevance due to international relations in the Middle East.

Bleah. Don't be surprised if this could be a potential metaphor for the "Arab spring" in the worst ways possible too. If Atlantis is supposed to serve as a possible metaphor for those, even that would only be reason to dread with a writer as repellant as Johns helming the story. One sure thing, please avoid his past writings like the Flash work he did, and also his early work on Green Lantern, which is just as repellant.

It's also quite galling how a man like Johns with terrible ideas for what makes entertainment is forcing his visions on Jewish creations (Aquaman creator Mort Weisinger was).
Posted by Avi Green at 9:03:00 pm

In what way is Bleeding Cool leftist?