The media can't fool us forever. The truth is coming out. 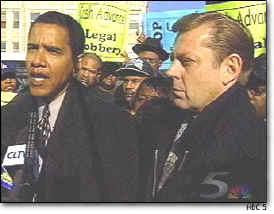 State Sen. Barack Obama and Fr. Michael Pfleger led a protest against the payday loan industry demanding the State of Illinois to regulate loan businesses in January 2000. During his time as a community organizer Barack Obama led several protests against banks to make loans to high risk individuals. (NBC 5 Week of January 3, 2000)
Here’s something that won’t get any play in the liberal media…
A new study by the respected National Bureau of Economic Research found that Democrats are to blame for the subprime mortgage crisis.
Investor’s Business Daily reported:

Democrats and the media insist the Community Reinvestment Act, the anti-redlining law beefed up by President Clinton, had nothing to do with the subprime mortgage crisis and recession.
But a new study by the respected National Bureau of Economic Research finds,“Yes, it did. We find that adherence to that act led to riskier lending by banks.”

Click on the title to read the whole thing.
Posted by Pastorius at 4:00:00 pm