Graphic novelists from Kansas take side of Algerian Islamists 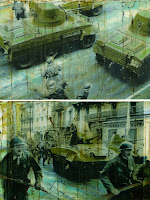 The Kansas City Star's written about a graphic novelist named Conger Beasley and artist Geo Sipp, who're working on a graphic novel called Wolves in the City about the French war in Algerian, and unfortunately, they're taking the side of the Religion of Peace here. The problem begins with the byline, which says:


An artist and a writer from KC depict Algeria’s struggle for freedom from France. It will sound very familiar.

You can see where it's all going from there. As told in the following:


Algeria celebrates the 50th anniversary of its independence from France this year, and a local project has been part of the festivities.

Five years ago, artist Geo Sipp and writer Conger Beasley Jr., both of Kansas City, had a meeting of the minds.

Independently, each had been looking into the history of the French-Algerian War, notorious for the widespread use of torture.

In the course of their readings, both came to see parallels between what happened at Abu Ghraib during the U.S. war in Iraq and what happened in Algeria half a century ago, when the French military used techniques such as waterboarding to elicit information from members of the Algerian resistance.

There were horrific acts on both sides.

“The French-Algerian war was the first modern war,” Sipp said in an interview at his home studio in the Roanoke/Valentine neighborhood. “There were suicide bombers, women fighters (see accompanying story), terrorism, street-to-street and house-to-house combat. Torture was implemented with no apology.”

They're trying to compare it to Iraq's "struggle for freedom" from the US. I know there were female suicide bombers in Iraq, but I'm not sure if beyond that, you could say that there were women fighters. And though they acknowledge that the Algerian side is guilty (or do they?) they're not exactly condemning of it.


Their “Wolves in the City” tells the story of Buster Higby, an American who serves in the French Foreign Legion during the French-Algerian War. Fleeing a murder rap in small-town Missouri, he enlists in the French military and is sent to Algeria. There, Buster, who has taken the name Bertrand, becomes part of a special squad charged with interrogating Algerian insurgents.

Bertrand becomes a highly effective torturer. He also falls in love, and his professional and personal involvements entwine in a dramatic denouement.

Making the star a fugitive from the law only makes this sound more tasteless. But look at that, just like the MSM's Iraq coverage, they won't call the criminals "terrorists", but rather, substitute a different name.


Sipp was moved to do the project after reading French-Algerian journalist Henri Alleg’s 1958 book, “La Question,” in which the author described being tortured by French soldiers seeking information about the FLN, or National Liberation Front resistance. Offering a vivid window onto the methods and tactics of torture employed by the French military, the book was banned by the French government.

“That was a book that led me to believe this is a very contemporary story,” Sipp said. “That was the real spark that made me think, ‘I’m interested in spending a good chunk of my life doing this.’ ”

“The FLN wanted to create a free Algeria,” Sipp said. “They were considered terrorists by the French military. It’s very similar to today. We see the same amorphous struggles in conflicts ranging from the Balkans to Iraq, Afghanistan, Syria and the Palestinian territories.”

I don't know the whole story behind Alleg's book, but when you see that dummy imply that he sides with the lie of a "palestinian people", you know something is gravely wrong here.


In their research for “Wolves in the City,” Sipp and Beasley also read Alistair Horne’s “A Savage War of Peace,” a definitive history of the Algerian war, first published in 1977.

In his preface to the 2006 edition of “War,” Horne drew a series of parallels between the Algerian war and the U.S. involvement in Iraq, including Iraq’s adoption of some of the same tactics used by the Algerian resistance and the U.S. government’s use of torture.

The clue that these 2 authors see nothing wrong with Saddam's dictatorship or his own use of torture and oppression of dissidents.

Curiously enough, they do acknowledge that Algeria's male-dominated society never really thanked the women who took part in the attacks on French military:


Asad Faulwell’s “Mujahidat #11,” on view in the museum’s ongoing “Oppenheimer Collection@20” exhibition, enshrines these women fighters within a colorful, patterned abstraction influenced by Islamic art and Moroccan textiles. The work is part of the young L.A. artist’s series of paintings devoted to the women of Algiers, many of whom were imprisoned and tortured by the French and rejected by their Algerian countrymen when the war ended in 1962.

“They (Algerian men) were taking women who they had no intention of empowering after the war, getting them to fight on the front lines and then (the resistance) turning their backs on them as soon as the war was over,” Faulwell told the Middle Eastern art journal, Muraqqua, in 2010.

As writer Yasmine Mohseni observed, “These women planted bombs and fired guns, yet, even today, people see them as victims.

“It is this dichotomy of viewing the Arab woman as a victim that makes the subject matter so compelling,” she said.

One positive outgrowth of the ongoing turmoil in the Middle East and the conflict between the West and Islam has been an increased interest in Islamic culture and history by American artists such as Sipp and Faulwell, who is of Iranian descent.

A growing number of exhibits are featuring artists from Islamic cultures and Middle Eastern countries. The recent “On Watch” exhibit at Block Artspace, for instance, introduced the local art audience to the work of Iraqi-born Jananne Al-Ani and Palestinian Taysir Batniji.

Alas, those women were victims of an Islamofascist mindset that would not thank them no matter how well they served, and the irony is that in a way, France was also guilty for failing to instill civilized cultural beliefs in Algerian society. And even they don't receive any thanks from Sipp and Beasley!

And there we have another example of graphic novels being noticed for all the wrong reasons.
Posted by Avi Green at 7:38:00 pm