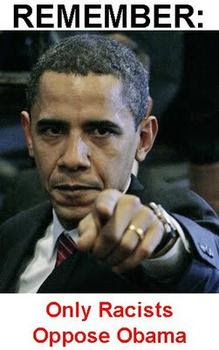 There is a different sort of racialist derangement spreading in the country — and it is getting ugly.

Here is actor Jamie Foxx joking recently about his new movie role: “I kill all the white people in the movie. How great is that?” Reverse white and black in the relevant ways and even a comedian would hear national outrage. Instead, his hip Saturday Night Live audience even gave Foxx applause.

Actor Samuel L. Jackson, in a recent interview, sounded about as unapologetically reactionary as you can get: “I voted for Barack because he was black. . . . I hope Obama gets scary in the next four years.”

No one in Hollywood used to be more admired than Morgan Freeman, who once lectured interviewers on the need to transcend race. Not now, in the new age of racial regression. Freeman has accused Obama critics and the Tea Party of being racists. He went on to editorialize on Obama’s racial bloodlines: “Barack had a mama, and she was white . . . very white, American, Kansas, middle of America . . . America’s first black president hasn’t arisen yet.”

Freeman’s racial-purity obsessions were echoed on the CNN website, where an ad for the network’s recent special report on race included a crude quote from three teen poets: “Black enough to be a n. White enough to be a good one.”

In the 21st century, are we returning to the racial labyrinth of the 19th-century Old Confederacy, when we measured our supposed racial DNA to the nth degree? Apparently, yes. ESPN sports commentator Rob Parker blasted Washington Redskins quarterback Robert Griffin III last week for admirably stating that he did not wish to be defined by his race rather than by his character: “He’s black, he does his thing, but he’s not really down with the cause.” Parker added: “He’s not one of us. He’s kind of black, but he’s not really like the kind of guy you really want to hang out with.” (ESPN suspended Parker for his remarks.)

Unfortunately, the new racialist derangement is not confined to sports and entertainment. The Reverend Joseph Lowery — who gave the benediction at President Obama’s first inauguration — sounded as venomous as the Reverend Jeremiah Wright in a speech that Lowery delivered to a black congregation shortly before this year’s election: “I don’t know what kind of a n***** wouldn’t vote with a black man running.” Lowery reportedly preceded that rant by stating that when he was younger, he believed that all whites were going to hell, but now he merely believes that most of them are. And in his 2009 inauguration prayer, Lowery ended with his hopes for a future day when “white will embrace what is right.”

Wasn’t Obama’s election supposed to mark a new post-racial era? What happened?
For nearly a half-century, cultural relativism in the universities taught that racist speech was bigotry only if it came from those — mostly whites — with power. Supposedly oppressed minorities could not themselves be real racists. But even if that bankrupt theory was once considered gospel, it is no longer convincing — given that offenders such as Foxx, Rock, and Lowery (who was given the Presidential Medal of Freedom by Obama) are among the more affluent and acclaimed Americans.

The Obama administration must shoulder some of the blame. Attorney General Eric Holder, our nation’s top prosecutor, has referred to African-Americans as “my people” and called Americans “a nation of cowards” for not focusing on race relations on his terms.

The president himself urged Latinos to “punish our enemies.” He weighed in unnecessarily during the Henry Louis Gates and Trayvon Martin affairs in ways that only added to the racial tensions. Vice President Joe Biden warned black voters at a campaign stop that Republicans were “going to put y’all back in chains.”

Obama, during the campaign, brilliantly — and cynically — targeted particular hyphenated voting groups on the basis of their race and ethnicity — on the assumption that such voters could be loosely united by opposition to a purported uncaring and shrinking conservative establishment. After the election, the Obama campaign asked its supporters to complete a survey that included a checklist with racial identifications — with “white” omitted.

There is a growing danger in this latest round of racial tribalism. Stirring up the pot for short-term political gain in a multiracial society is abjectly insane. If the new racialism grows unchecked, it will eventually lead to cycles of backlash and counter-backlash — and some day to something like the Balkans or Rwanda.

People are just people. But they can turn into veritable monsters when — as a great American once warned — they look to the color of our skin rather than the content of our character.

All one has to do is evaluate the fraudulant Kwanza. Created by a wife beating felon accepted by the lackey demorats as authentic. It is as authentic as a knock off coach bag made in China.

Here's a link to a write-up that destroys the fake Kwanza: http://yidwithlid.blogspot.com/2012/12/kwanzaa-is-fraud-of-holiday-created.html

Kwanza a fake holiday created by a convicted felon with facist goals for the ignorant urban masses.