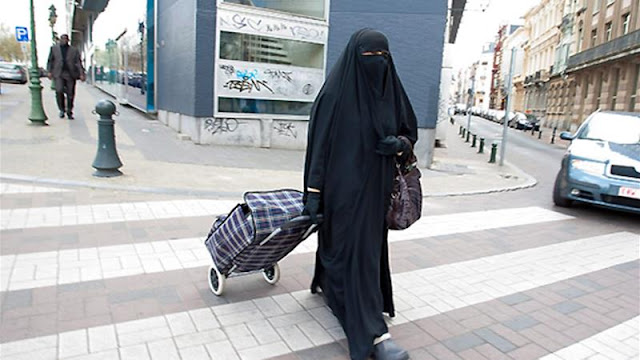 It's very likely that this woman is not, at all, a "Danish woman."

But the authorities won't release her name, nor are they able to access any photographs of her.

For all we know, "she" could be the leader of ISIS.

Thanks to The Last English Prince:


A Danish woman, who allegedly refused to take off her niqab, the religious outfit covering face and full body, has been deported from the Brussels airport after police were unable to identify her, a Belgian official said.
Theo Francken, the Belgian State Secretary for Asylum and Migration, confirmed the incident on Saturday on his official Twitter account.
"A Danish citizen coming from Tunis refused to take off her niqab at our border. Police could not identify her. She was sent back to Tunis," Francken tweeted.
He did not identify the woman by her name.
"Thursday I informed my Danish colleague Inger Stojberg, Danish minister for immigration, integration and housing] about the niqaab-incident with a Danish citizen on our Schengenborder," he added.
In November 2015, police in Brussels briefly held a Saudi woman wearing a niqab.

A law banning women from wearing the full-face veil, niqab, and burqa, which also covers the eyes, came into force in Belgium on July 23, 2011.
Women wearing full-face veils in public are subject to fines and can face up to seven days in jail in the country.
Posted by Pastorius at 4:02:00 am

Nah. It was Maulana Abdul Aziz.