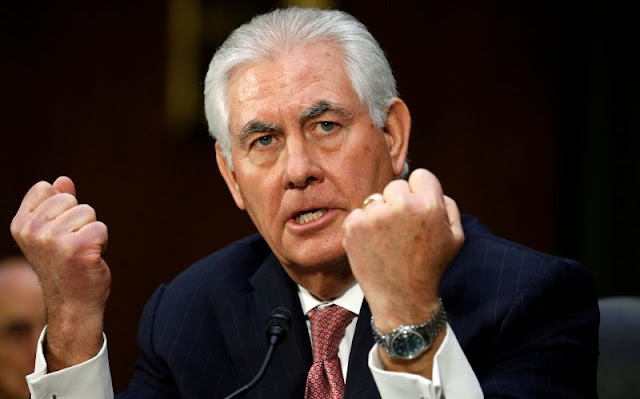 From the Gatestone Institute:


Since he was sworn in as Secretary of State on February 1, Tillerson and his advisors at the State Department have made a number of statements and policy decisions that contradict Trump's key campaign promises on foreign policy, especially regarding Israel and Iran. August 10.

The State Department hosted representatives of the U.S. Council of Muslim Organizations (USCMO), an umbrella group established by the Muslim Brotherhood with the aim of mainstreaming political Islam in the United States. Behind closed doors, they reportedly discussed what they said was Israel's illegal occupation of Palestine and the removal of all Israeli control of the Temple Mount and holy areas of Jerusalem.

Observers said the meeting was part of larger effort by anti-Israel organizations to drive a wedge between the Trump administration and Israel. The USCMO includes a number of organizations, including American Muslims for Palestine (AMP), which promote "extreme anti-Israel views" and "anti-Zionist" propaganda, and which support boycotts of the Jewish state.

July 19. The State Department's new "Country Reports on Terrorism 2016" blamed Israel for Palestinian Arab terrorism against Jews. It attributed Palestinian violence to: "lack of hope in achieving statehood;" "Israeli settlement construction in the West Bank;" "settler violence;" and "the perception that the Israeli government was changing the status quo on the Haram Al Sharif/Temple Mount." The report also characterized Palestinian Authority payments to the families of so-called martyrs as "financial packages to Palestinian security prisoners...to reintegrate them into society."

Rep. Peter Roskam (R-IL) called on the State Department to hold the PA accountable in State Department Country reports: "The State Department report includes multiple findings that are both inaccurate and harmful to combating Palestinian terrorism.... At the highest level, the Palestinian Authority (PA) leadership incites, rewards, and, in some cases, carries out terrorist attacks against innocent Israelis. In order to effectively combat terrorism, it is imperative that the United States accurately characterize its root cause — PA leadership."

FrontPageMag: Democrats play PakMan with national security - Another secret server expands the IT intrigue
Back in July, when House Democrats’ mysterious IT man Imran Awan attempted to flee the country, authorities arrested him at Dulles airport on charges of bank fraud. For Andrew McCarthy, who prosecuted the “Blind Sheik” Omar Abdel-Rahman, “this appears to be a real conspiracy, aimed at undermining American national security.” Turns out, McCarthy was on to something.

“A secret server is behind law enforcement’s decision to ban a former IT aide to Democratic Rep. Debbie Wasserman Schultz from the House network,” reports Luke Rosiak in the Daily Caller. Law enforcement has indicted Awan, charging that he “routed data from numerous House Democrats to a secret server.”
*****
https://twitter.com/lukerosiak/status/902725493375500288
Imran's secret 123@mail.house.gov account is tied to intelligence/homeland security staffer for Rep. Andre Carson
(read entire twitter thread to witness how expansive AwanGate is)
*****
UKDailyRecord 12/2014: FBI fraud fugitive who tried to rape a student while on the run is jailed for three years

JOHAR Mirza, who is wanted in America for an alleged £1million mortgage scam, tried to rape a student in Glasgow's west end in July 2010.