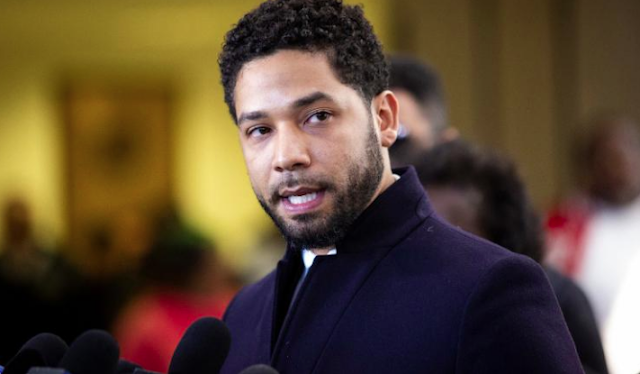 HE SHOULD BE INDICTED FOR A HATE CRIME FOR ATTEMPTING TO FOMENT RACIAL HATRED AGAINST WHITE PEOPLE!


A Cook County, Illinois, grand jury has returned a six-count indictment against actor Jussie Smollett for making false reports to police that he was a victim of a hate crime, a special prosecutor said Tuesday.

Smollett, who is gay and black, said he was the victim of a racist and homophobic attack near his Chicago apartment on January 29, 2019. Chicago police investigated the case as a hate crime but later said the actor orchestrated the incident and paid two men who were acquaintances from the TV show on which he starred -- brothers Olabinjo and Abimbola Osundairo -- to stage the incident for publicity.

The former "Empire" actor has repeatedly denied making up or orchestrating the attack. Dan K. Webb, the special prosecutor assigned in August to investigate how local prosecutors handled the TV actor's case, said in a statement his office "has now completed all of its investigative steps regarding Jussie Smollett, and has made the decision to further prosecute Mr. Smollett."

"Based on the recommendation of the OSP (Office of the Special Prosecutor), a Cook County grand jury returned a six-count indictment charging Jussie Smollett with making four separate false reports to Chicago Police Department officers related to his false claims that he was the victim of a hate crime, knowing that he was not the victim of a crime," the statement said.

Webb, a former US attorney, concluded that Smollett's prosecution is "in the interest of justice." Several factors went into Webb's determination, "including the extensive nature of Mr. Smollett's false police reports, and the resources expended by the Chicago Police Department to investigate these false reports."