UK: Abu Hamza rejects move to deprive him of UK passport because that would be a breach of his Human Rights 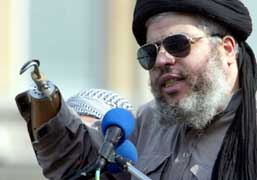 
HATE preacher Abu Hamza yesterday launched a new bid to keep his British passport in a legal battle that has so far cost £1.4million.

Hamza is fighting attempts to strip him of his citizenship arguing it is a breach of his human rights.

The hook-handed cleric says that he has been disowned by his native Egypt and that taking away his British passport would leave him “stateless”.

Hamza, 52, is in high-security Belmarsh prison, south London, where he is fighting an attempt by the Home Office to extradite him to the US where he is wanted on terror charges.

The cleric’s legal battle has run for more than six years. Legal experts predict the final bill will top £2million. The latest court hearing got underway yesterday at the Special Immigration Appeals Commission in central London. It is expected to last three days at a cost of £120,000.

He can always go to live with the Talibans: I'm sure they agree on most things.

Anyway, it's appalling how this shameless haters speak of Human Rights, while at the same time, don't respect other people's Human Rights.

Labels: Abu Hamza, In the UK

Hahahah... yeah, those words are the more appropriate...