At least 20 killed in train derailment in Spain: reports


Now isn’t that interesting. In france in the last week or so there have been two train derailments, one having passengers and another containing nuclear waste. Both are thought to be sabotage. In Canada we had a very very serious train derailment that has killed scores of people and wiped out part of a small town within the last month. Now we have a train derailment in Spain killing 20 and not too long after Al-Qaeda suggested that muslims go after trains instead of aircraft as they are much easier targets. 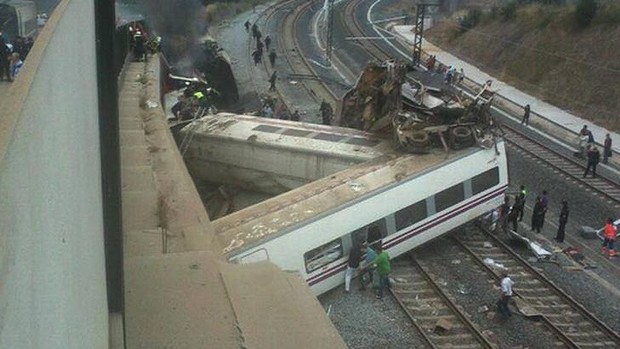 Madrid: At least 20 people were killed when a train derailed outside the northern Spanish city of Santiago de Compostela on Wednesday, state media and witnesses said.
Train wagons lay on their sides with smoke billowing from the wreckage, photographs published on the Voz de Galicia newspaper website showed.
“It was going so quickly … It seems that on a curve the train started to twist, and the wagons piled up one on top of the other,” passenger Ricardo Montesco told Cadena Ser radio station.
“A lot of people were squashed on the bottom. We tried to squeeze out of the bottom of the wagons to get out and we realised the train was burning … I was in the second wagon and there was fire … I saw corpses,” he added.
VLAD HAS VIDEO

Just read a report from Spain where one of the conductors - injured but alive= claimed he phoned control before the crash because the train was doing 190 K in a curve limited to 80Km.