Former Top HHS Official: The Obamacare Battle Is No Longer About Healthcare, the Constitution Is At Stake 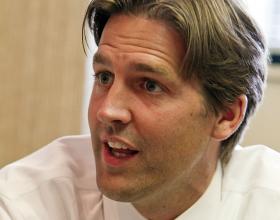 The author has served as chief of staff for the U.S. Justice Department’s Office of Legal Policy and as assistant U.S. secretary of Health and Human Services under President George W. Bush. Currently president of Midland University, he has been exploring a U.S. Senate candidacy.
Obamacare is a ticking time bomb for Democrats in the 2014 elections. Nobody knows this better than President Barack Obama, which is why over the Fourth of July holiday weekend he unilaterally decided to delay its controversial employer mandate provision until after the midterm elections.
No wonder: The $2,000 per-worker fine is disastrously unpopular. Already, employers are laying off workers and dramatically cutting others’ hours in an effort to skirt the new penalty. The fact that this perfectly predictable development surprises many in Washington only underscores that they didn’t really read this 2,300-page monstrosity before they passed it.
Desperate for any appearance of victory, Republican leaders have decided to match the president’s delay with one of their own: proposing legislation to delay for a year the mandate for individuals. Perhaps useful, perhaps not. Well-meaning people can differ about legislative strategy.
But if Republicans don’t have a larger plan to actually oppose this unprecedented power grab in a way the American people will understand, then they will have given up the ghost on actually turning back the slew of new job-killing bureaucracies.
Congress should completely defund Obamacare by October, when the government next runs out of money. To paraphrase Ecclesiastes, there are times for half-measures, and there are times to get the job done. If Republican leaders intend to vote only on an individual mandate delay, then this half-measure will serve only to keep Obamacare limping along now to wreak its havoc and ruin on the economy later.
Republican leaders are understandably wary of being blamed for a government shutdown at the next showdown about running out of money (yet again).
But Congress must not do anything to prop up this faltering law. For the moment the Obama administration declared the employer mandate would be delayed until after a tough election, this debate transcended a fight over health care and became a fight about transforming our constitutional system of separate but equal branches of government.
This is now about ceding power to a runaway executive branch that the Constitution simply does not allow.

The ONLY hope for halting this is BOTH a massive republican victory in 2014, and a LARGER ONE in 2016.

The democrats will have to be a party facing the facts on the ground that Obama has led them to a disaster to reverse ACA, AND the republicans will have to have a replacement program ready to go.