And HE does it again! Now, apologies are insufficient ..HO CHI MINH INSPIRED BY FOUNDERS!

Not only was I against the war in vietnam, I helped ORGANIZE demonstrations, waaaaaaaaaaaaaaaaay back.
BECAUSE WE HAD ALMOST NOTHING AT STAKE (Syria anyone?) We therefore had no reason to kill or be killed.
But NO ONE doubted that Ho Chi Minh, the NVA, and the Viet Cong were utter bastards, and servant of the communist dictatorships.
And now?

Obama Says Vietnamese Dictator Inspired by Founding Fathers
“…we discussed the fact that Ho Chi Minh was actually inspired by the U.S. Declaration of Independence and Constitution, and the words of Thomas Jefferson.”
— President Obama talking to reporters alongside Vietnamese President Truong Tan Sang.
It may come as some unwelcome news to the families of the nearly 60,000 Americans who died in the Vietnam War that the whole thing was just a misunderstanding.
That was the impression President Obama gave on Thursday when he spoke to the press after his meeting with Vietnamese President Truong Tan Sang. Sang brought Obama a copy of a letter sent to President Harry Truman from Ho Chi Minh in which the communist dictator spoke hopefully of cooperation with the United States.
Obama, striking a wistful tone, observed that it may have taken 67 years, but the United States and Vietnam were finally enjoying the relationship that Ho once wrote of. After all, Obama said, Ho had been “inspired by the words of Thomas Jefferson.” 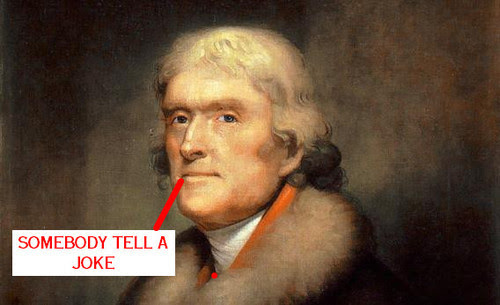 I swear, I just can’t stand it.
Where are all of you jackasses that voted for this guy?
What is your excuse, that the others who might have been president are just as bad?
NOT A CHANCE.
Posted by Epaminondas at 6:12:00 pm