Egypt: Dumbfuck Muslims Believe Morsi Is In Cahoots With Hamas, Obama, and The Jews to Give Away Sinai 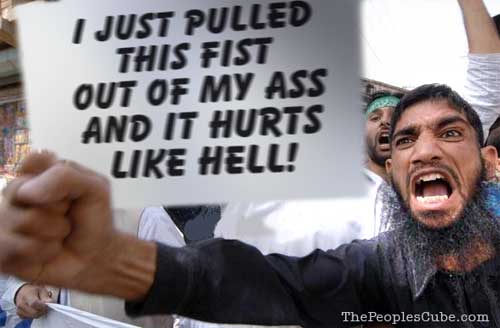 For God's sake what a stupid conspiracy theory.

What are these dumbfucks smoking?


The daily paper El Dostor, which is closely affiliated with the liberal opposition Wafd party, has conducted a fierce battle against the Muslim Brotherhood's regime. It took its battle one step further and its headline read: "Egypt has crushed the Zionist, American and Muslim Brotherhood's lobby with the ouster of Morsi."

According the lively imagination of the paper's editors, the three groups were in cahoots in a bid to bring about a division in Egypt, allow radicals to take over Sinai and use such a situation to justify an Israeli reoccupation of the peninsula, where an alternative Palestinian homeland would be formed.

No small number of the Egyptians I spoke with echoed these narratives, as well as the claim that the Brotherhood allowed Hamas free access to Sinai so they could take over the Egyptian territory.

The reason I knew to post this (if you click around, you'll find IBA is the ONLY anti-Jihad blog to have this story so far) is because AN EGYPTIAN FRIEND OF MINE TOLD ME THIS STORY AS THE TRUTH.

My friend is an intelligent guy, but he believed this inane bullshit.

The question may be asked "Just what is Islam ?" One of the answers to this is "Islam is a religious/political/cultural system of tyranny that controls the minds of millions of people around the world." I the light of this, it's very fitting to cite the wisdom of Thomas Jefferson when he stated "I have sworn upon the alter of God eternal hostility against very form of tyranny over the minds of man."

If Muslims don't like someone that someone then automatically becomes a friend of the Jews and Zionists and whatnot.

I call BS on this story just because I've heard various different versions of it since I can remember.

Talk to the Morsi camp and they will say the Zionists and the Jews got rid of Morsi so they could install their puppets in Egypt.

Perfect symmetric story for both sides.

BTW, it was my plan, and you are all welcome.

BWAH HAH HAH, and I used your tax money to effect my own jewdesires.

Tomorrow, Mecca.
It will be the home of my new Hollywood Talent agency,