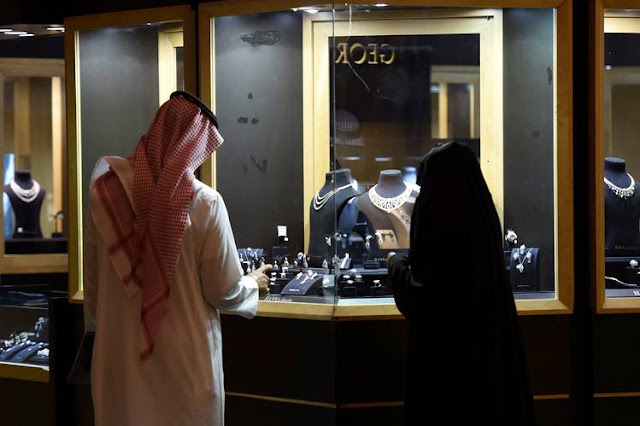 In my opinion, there are much larger implications than merely "shocking the Saudi Middle Class".

Think on what is being said here in this Wall Street Journal article:


A sharp drop in the price of oil, Saudi Arabia’s main revenue source, has forced the government to withdraw some benefits this year—raising the cost of living in the kingdom and hurting its middle class, a part of society long insulated from such problems.

Saudi Arabia heads into next week’s meeting of major oil producers in a tight spot.

With a slowing economy and shrinking foreign reserves, the kingdom is coming under pressure to take steps that support the price of oil, as it did this month with an accord it struck with Russia.

The sharp price drop is mainly because of a glut in the market, in part caused by Saudi Arabia itself. The world’s top oil producer continues to pump crude at record levels to defend its market share.

One option to lift prices that could work, some analysts say, is to freeze output at a certain level and exempt Iran from such a deal, given that its push to increase production to pre-sanction levels appears to have stalled in recent months.

Saudi Arabia has previously refused to sign any deal that exempts arch rival Iran. As its people start feeling the pain, that could change.

The kingdom is grappling with major job losses among its construction workers—many from poorer countries—as some previously state-backed construction firms suffer from drying up government funding.

Saudi consumers in major cities, the majority of them employed by the government, have become more conscious about their spending in recent months, said Areej al-Aqel from Sown Advisory, which provides financial-planning services for middle-class individuals and families. That means cutting back on a popular activity for most middle-class Saudis: dining out.

“Most people are ordering less food or they change their orders to more affordable options,” she said. To boost state finances, Saudi Arabia cut fuel, electricity and water subsidies in December, after posting a record budget deficit last year. It also plans to cut the amount of money it spends on public wages and raise more non-oil revenue by introducing taxes.

But in response to these moves, inflation more than doubled from last year to about 4% now, crimping consumers even more.

The government doesn’t have much choice. Saudi Arabia’s real growth in gross domestic product slowed to 1.5% in the first quarter from the year-earlier period, according to its statistics office, and Capital Economics says data suggest it may have contracted by more than 2% in the second quarter.

Much of that slowdown is related to consumer-facing sectors, which have struggled since the start of 2016 as rising inflation has eroded household incomes.

The political stakes for managing this slowdown are high. Saudi Arabia survived the Arab Spring unrest that toppled several autocratic leaders across the region and forced some others to change, largely by offering cash handouts and more government jobs to placate its people.

About two thirds of Saudi workers are employed by government related entities.

Saudi's main export is oil. Actually, that's pretty much their only export. They produce almost nothing.

2/3rds of it's citizens are employed by the government.

That means, there is real pain in Saudi Arabia.

Real pain for the Saudis is an opportunity for the Western World.

Saudi already sees itself at odds with Iran.

The USA is the #1 oil-producing nation in the world, and has nowhere to go but up.

Saudi Arabia is #2, and many believe it is on it's way down in oil-production.

This means that BREAKING THE BACK OF OPEQ IS A REAL POSSIBILITY.

If Saudi is forced to exempt Iran from an OPEQ agreement, that could weaken the ranks within the OPEQ nations, and force a real fissure which could lead to the breakup of OPEQ.

Will the Western world realize the opportunity and band together to do what it needs to do?

Yet another blow to globalism!

I'll clap when the Saudi dawa budget is eliminated

Related:
OilPrice.com: Crude Crashes As Saudis Kill OPEC Meeting Before It Even Started

"Will the Western world realize the opportunity and band together to do what it needs to do?"

No but the Trump admin will.

Employed by the government.... to sit on couches with overinflated titles and shoot the breeze all day.

They have ornate, gaudy couch employment.

Watch out for their youth bulge. One day, they will have their own Arab Meltdown.

It is only a matter of time.