Trump Discusses Border Fences With Netanyahu, Promises He Will Declare Jerusalem The Capitol of Israel When He is President 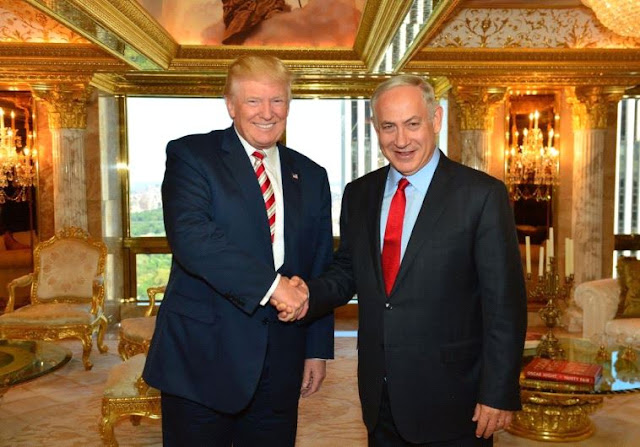 Ask yourself, "When is the last time you've seen Netanyahu smile like that

when meeting with an American leader?"


And my "Conservative" friends are wondering whether they should vote for Trump.


Donald Trump “discussed at length Israel’s successful experience with a security fence that helped secure its borders” during a meeting with Prime Minister Benjamin Netanyahu that lasted longer than an hour, according to a statement from the Republican presidential nominee’s campaign. Trump’s proposal to build a wall on the U.S. border with Mexico as way to confront illegal immigration has become a cornerstone of his campaign, although the statement did not say whether he drew direct parallels with Israel’s border fence, which is meant to combat terrorism. The real estate investor also “acknowledged that Jerusalem has been the eternal capital of the Jewish People for over 3000 years, and that the United States, under a Trump administration, will finally accept the long-standing Congressional mandate to recognize Jerusalem as the undivided capital of the State of Israel,” his campaign said after Sunday’s meeting.

Note how Bloomberg refers to Trump as "the real estate investor."

Not the Republican Candidate for President of the United States of America, Leader of the Free World. The "real estate investor."

You keep telling yourselves that, Bloomberg.

UPDATE - MEANWHILE, THE "ZIONISTS" IN KNESSET ARE CALLING TRUMP A "RACIST" AND A "NEO-NAZI", PROVING THEY ARE JUST AS FUCKING STUPID AS THE "CONSERVATIVES" IN OUR FUCKED-UP COUNTRY.

Also he's not a real estate "investor". He's a real estate DEVELOPER. Big difference between a moron like Bloomberg who just throws money around to get rich vs a guy who actually knows how to make something.

Since he is gutsy enough to declare Jerusalem the capitol of Israel, he just got me vote.

Since he is gutsy enough to declare Jerusalem the capitol of Israel, he just got me vote.

"MEANWHILE, THE "ZIONISTS" IN KNESSET ARE CALLING TRUMP A "RACIST" AND A "NEO-NAZI", PROVING THEY ARE JUST AS FUCKING STUPID AS THE "CONSERVATIVES" IN OUR FUCKED-UP COUNTRY."

Zionist Union is a libtard party in Israel. Joint List is Arabs, mostly Muslims who, to no one's surprise, are vehemently pro terrorist.

Did not know that.

Thanks for helping me to understand.

Their name would indicate they were Conservatives.