HILLARY CHEATING AT THE DEBATE? 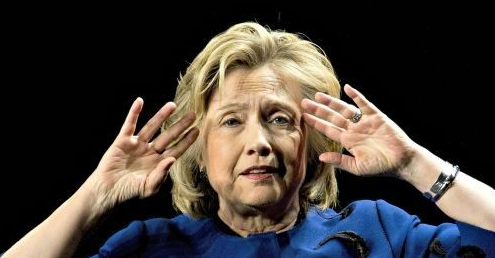 During the debate, several comments mentioned it appeared that Hillary was reading from her notes and she appeared to pay less attention to Donald with short pauses between her ramblings.
Some lady on twitter made a great point.[Hillary wasn't thumbing through notes] You cant have your notes follow the exact order of the questions any other way. Hillary knew the questions!
Twitter: What's on Hillary's back? Microphone? Coughing prevention machine? Earpiece?
A former audio tech suggested it could be an in-ear wireless monitor but that's not to say they both had the SAME monitors.
Here is a photo of Trump's lecturn from the side and a glimpse of Hillary's lecturn.
Here is a snapshot of The post debate cleaner

and then handed them off to Lester Holt?

@TheLastRefuge2 Who is the Cleaner, and why does he appear to hand off Hillary's papers to Lester Holt? #TheCleaner #Debates2016 pic.twitter.com/DWrg58Wwao
— Wolf Moon (@WOLFM00N) September 27, 2016


No one appeared to collect Trumps notes in a similar fashion. Hmmmm.
Clinton received debate questions week before debate, according to sources
The first presidential debate was held and Hillary Clinton was proclaimed the winner by the media. Indeed Clinton was able to turn in a strong debate performance, but did she do so fairly? Multiple reports and leaked information from inside the Clinton camp claim that the Clinton campaign was given the entire set of debate questions an entire week before the actual debate.

Earlier last week an NBC intern was seen hand delivering a package to Clinton’s campaign headquarters, according to sources. The package was not given to secretarial staff, as would normally happen, but the intern was instead ushered into the personal office of Clinton campaign manager Robert Mook. Members of the Clinton press corps from several media organizations were in attendance at the time, and a reporter from Fox News recognized the intern, but said he was initially confused because the NBC intern was dressed like a Fed Ex employee.
Posted by Pastorius at 5:00:00 pm

More Afghan soldiers who were training here in the US have gone missing:

Three of the Afghan military trainees fled from a Pentagon training program two weekends ago during the bombing spree in New York and New Jersey by Afghan-born bombing suspect Ahmad Rahami, raising concerns among security officials that the missing Afghan students may be linked to terrorism or plans for attacks in the United States.