You See the Way White People Do Ya? Clock Boy Mix 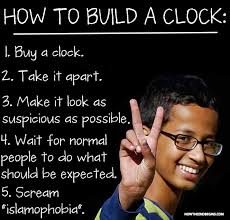 These folks should never have been permitted to establish residence in this country.
Recall, VDare: Ahmed's father regularly runs for president of Sudan
"Because his name is Mohamed and because of September 11th," Mohamed told The Dallas Morning News, "I think my son got mistreated."
According to Mark Steyn, Clock boy's uncle runs a trucking company called "Twin Towers
Transportation"
Clock boy's dad is the Imam who played Defense Attorney when Koran-burning
preacher Terry Jones put the Koran on trial

Yet here we remain with more unvetted Syrians and more 'vetted' Afghan soldiers who were training here in the US have now gone missing:

Missing Afghans Raise Terrorism Fears
Seven military students fled training in U.S. this month
Three of the Afghan military trainees fled from a Pentagon training program
two weekends ago during the bombing spree in New York and New Jersey by Afghan-born bombing suspect Ahmad Rahami, raising concerns among security officials that the missing Afghan students may be linked to terrorism or plans for attacks in the United States.

Brought to you by the same administration that vetted the San Bernardino and Boston bombers and in previous years
CNN 2014: Afghan soldiers training in Massachusetts go missing

The adventures of Clock Boy are here to stay for a while. **sigh**