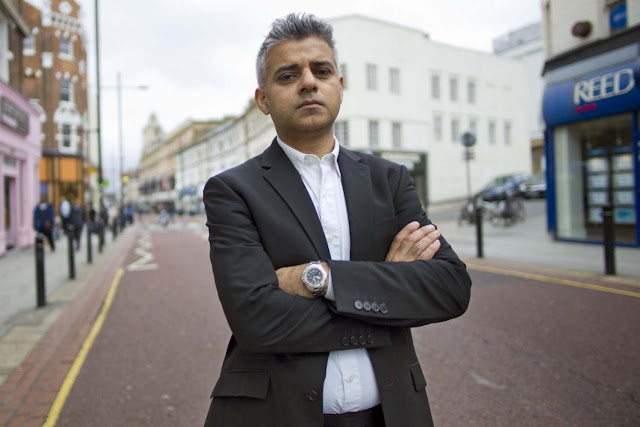 SADIQ Khan is hoping to maintain the number of migrants entering London by implementing new visa plans for the capital when Brexit is finally put into motion.

The London mayor said a team of business representatives were “working on a model that will ensure we can carry on recruiting and attracting talent”.

When pressed on the issue of a separate work visa for migrants coming to work in the capital, Mr Khan said: “In principle I want to make sure that my job as the mayor means supporting businesses to grow and expand, encouraging business to come into London.

So much for the will of the people!

UKDailyMail: Two men seen removing undetonated bomb from suitcase left on Manhattan street 'by chicken shop terrorist' identified by FBI as 'Egyptian pilots who have left the U.S.'
Two young men found the pressure cooker on 27th Street, Manhattan
It was inside a rolling suitcase but they put it in a garbage bag, sources said
They took the suitcase and left, having unknowingly deactivated the bomb
The two men are not believed to have played a part in the explosions
FBI believes it has identified the two men who are no longer in the U.S.
Officials say they're Egyptian pilots who are presumed to be back in Egypt

"SADIQ Khan is hoping to maintain the number of migrants entering London by implementing new visa plans for the capital when Brexit is finally put into motion."

ROFL. London mayor's office does not have any jurisdiction on immigration matters to be able to issue visas. Or have a say for that matter. Trump was right when he said Sadiq's IQ may be low...I'm thinking its extremely low.

He could do what the leftscum do here in the US, and declare London a "Sanctuary City".

The UK system does not allow for that. The US system allows for sanctuary cities because of how decentralized the government is actually supposed to be. The UK on the other hand prefers centralized control.

So when this moron says he will issue visas...its impossible for him to do that. If he declares London a sanctuary city, all he will get is his vagina in his hands because the city government has absolutely no jurisdiction in the matter.

It is obviously a completely different matter whether May's government actually wants to do anything to curb immigration. Whatever happens though this idiot does not have the power to make or break anything regarding immigration.

Well, that is good news.

On the other hand, I put no perfidy past Western Governments.

The London Mayor is "working on a model that will ensure we can carry on recruiting and attracting talent”.

what if those egyptian pilots weren't pilots, but egyptian govt CI agents?

and they didn't 'unknowingly' diffuse the device. it was done on purpose

what if foreign CI agents have penetrated the MoBros (Muslim Bro Hood) and are working to stop their efforts. Far fetched I know, but Black Swan events can happen on occasion

You know, that wouldn't be surprising, would it?

Al-Sisi knows Obama is a bad guy who is working to extend the power of the Muslim Brotherhood. Maybe he's decided to join the war on all fronts, especially an important one like the US.

Then on the other hand, I am probably wrong.

Then again, the world is seeing a change in the political direction in this country. The Uni Party is being challenged forcefully. Maybe they're hedging their bets.