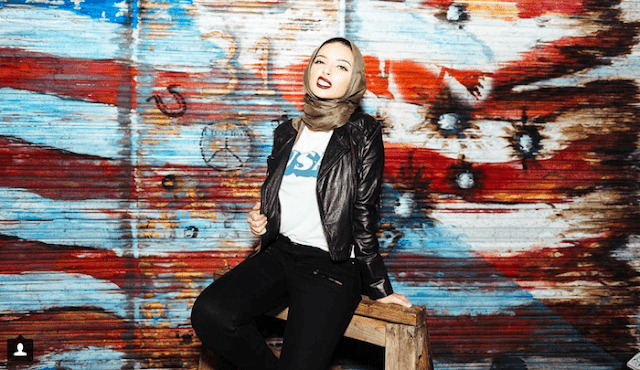 But American journalist Noor Tagouri has changed all that, appearing in the magazine’s October “Renegades” issue wearing her hijab proudly.

Decked out in jeans, a leather jacket and Converse sneakers, the 22-year-old said her goal is to become the first hijabi anchor on commercial US television.

She produces stories for Newsy, an American video news network that produces short form video news pieces. Tagouri believes her experiences as a Muslim woman have made her a better reporter.

“To be honest, I think being a hijabi Muslim woman, helped me gain that trust [from interview subjects],” she told Playboy.

“I know first-hand that once people are re-empowered, they realise their own story is powerful and they begin to share. It’s incredibly rewarding and can even help enlighten or save others.”…

But Noor Tagouri is no “renegade” for wearing a hijab. And her community is indeed misrepresented in the media, but not in the way she was claiming. She is a conformist within her own community and a darling of the Leftist media establishment that loves Sharia conformity as a manifestation of diversity and multiculturalism.

If Playboy really wanted to celebrate “Renegades,” how about Aqsa Parvez, whose Muslim father choked her to death with her hijab after she refused to wear it?

Or Aqsa and Amina Muse Ali, a Christian woman in Somalia whom Muslims murdered because she wasn’t wearing a hijab?

Or the 40 women who were murdered in Iraq in 2007 for not wearing the hijab;

or Alya Al-Safar, whose Muslim cousin threatened to kill her and harm her family because she stopped wearing the hijab in Britain;

or Amira Osman Hamid, who faced whipping in Sudan for refusing to wear the hijab;

or the Egyptian girl, also named Amira, who committed suicide after being brutalized for her family for refusing to wear the hijab;

or the Muslim and non-Muslim teachers at the Islamic College of South Australia who were told that they had to wear the hijab or be fired;

or the women in Chechnya whom police shot with paintballs because they weren’t wearing hijab;

or the women also in Chechnya who were threatened by men with automatic rifles for not wearing hijab;

or the elementary school teachers in Tunisia who were threatened with death for not wearing hijab;

or the Syrian schoolgirls who were forbidden to go to school unless they wore hijab;

or the women in Gaza whom Hamas has forced to wear hijab; or the women in Iran who protested against the regime by daring to take off their legally-required hijab;

or the women in London whom Muslim thugs threatened to murder if they didn’t wear hijab;

or the anonymous young Muslim woman who doffed her hijab outside her home and started living a double life in fear of her parents,

or all the other women and girls who have been killed or threatened, or who live in fear for daring not to wear the hijab?