A New Jersey Transit train plowed into the Hoboken terminal during the Thursday morning rush hour, shortly before 9 a.m.

Officials told ABC News that there were “multiple serious” injuries resulting from the crash.

Images posted on social media show that the train severely damaged the station, leaving debris and twisted columns of metal in its aftermath. 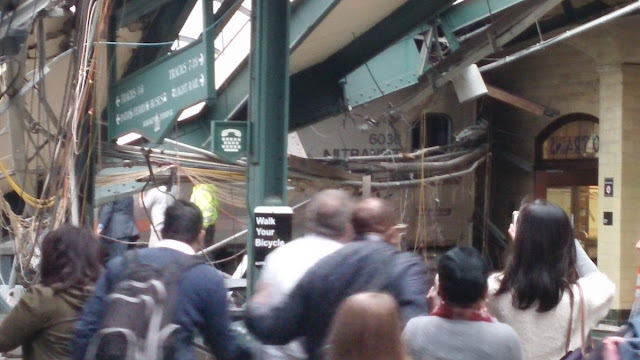 Train crashes into Hoboken station... Developing...
'It simply did not stop'... 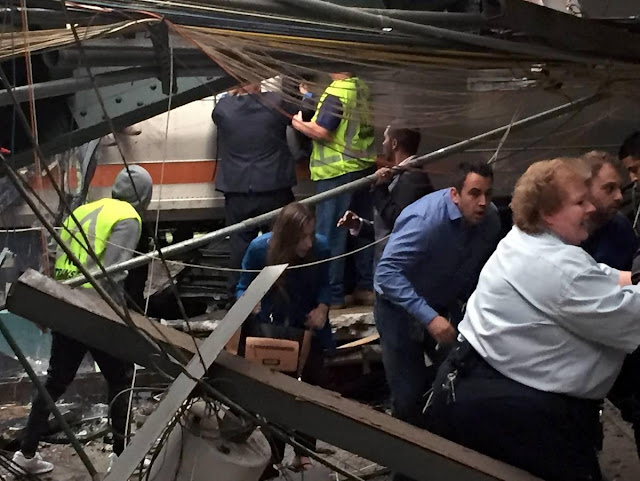 AND THEN THERE'S THE INEVITABLE "NOTHING TO DO WITH ISLAM"

Scariest quote on Hoboken: "The train never stopped. The terminal was basically the brakes for the train." https://t.co/PJ4zsVF4bl
— Ben Greenman (@bengreenman) September 29, 2016

Related, but weird...
This comment was posted at FreeRepublic:
This is video of a civil alert yesterday from a WKTV Channel 2 Utica, NY.

They later posted on their twitter feed to ignore the alert.
https://www.youtube.com/watch?v=0uWX_3era2g

Red banner at top of video segment reads:
"Civil authorities have issued a Hazardous Materials Warning for The United States. Effective until September 29, 02:16 AM EDT. Would you. Could you. On a Train? Wait for further instructions>"

WKTV NewsChannel 2 Facebook post:
"IMPORTANT NOTE - If you were watching our newscast around 6:17 p.m. you may have seen a "Hazardous Materials Warning" crawl across your screen. There is NO such warning. The message was an automated test which was not intended for public display. Again, there is NO warning. Our apologies for the confusion this may have caused."

What happened to the comment about the Hazardous Materials warning?

There is something very strange going on here lately.

There we go. Fixed it.

The NPT test code will be sent from FEMA’s alerting infrastructure, known as IPAWS, and relayed through all aspects of the EAS. The test message will be the same as a typical monthly EAS test message, with one exception: the word “National” will be added to the test message.

The goal of the mandatory test is to assess the operational readiness and effectiveness of the IPAWS infrastructure for distribution of a national-level message to the public. A second goal is to implement a standard method for regular alert and warning tests which help to improve the national preparedness posture.

The test is expected to have limited impact on the public with only minor disruptions of radio and television programs. Only the EAS will be tested in this nationwide test. Cell phone and other FEMA alerting capabilities will not be tested during this event.

Pasto,
There is something very strange going on here lately.

Meanwhile, I'll check the spam folder every chance I get.