Electrical short-circuit is believed to have started Notre Dame blaze, investigators believe, But there never was electricity in the area where the fire started 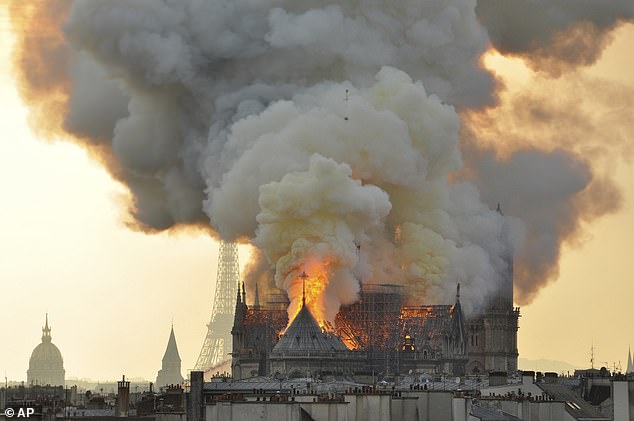 Company said it took pictures every 10 minutes until fire started around 6.40pm

Meanwhile, firefighters who helped save the cathedral arrived to meet Macron

HOW SUSPICIOUS IS IT THAT THE CAMERAS WERE SET UP THE VERY DAY OF THE FIRE?

WERE THEY EXPECTING A FIRE?

AND THEN WHOEVER DID START THE FIRE KNEW ENOUGH TO SHUT DOWN THE CAMERAS WHICH HAD JUST BEEN INSTALLED.

No electricity was ever put in the top of Notre Dame “to prevent fire” https://t.co/JPUmMMNUlE
— Diana West (@diana_west_) April 17, 2019

#NotreDame Head of scaffolding co.: "At the start of the fire absolutely none of the employees of my company was on site" https://t.co/UrSGVXkg5e pic.twitter.com/RxZQMtDZPi
— Andrew Bostom (@andrewbostom) April 17, 2019

"I believe profoundly that we need to turn this catastrophe into an opportunity to come together," French President Emmanuel Macron said after the Notre-Dame blaze on Monday.

I salute across the centuries the geniuses who built this beautiful and wonderful edifice so strong that she survived a conflagration like that!