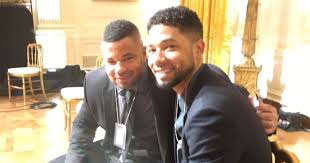 Jussie Smollett‘s eldest brother made a passionate defense of the “Empire” star — claiming he gets “night terrors” from the race-hate attack he has been accused of staging.

Jojo Smollett, 41, wrote a lengthy op-ed-style defense for BET titled, “What If Jussie Is Telling The Truth?” In it he called his brother an “exceptional individual” and “unusually good, soulful and spiritual man” — while slamming suggestions he staged the attack in January as “ludicrous.”

Instead, Jojo’s piece claims the actor’s “life has been turned upside down” from “unrelenting attacks to his character and reputation.”

“Many appeared to roast him, demean him, and laugh at a traumatic and painful ordeal,” Jojo wrote.

Either the brother is stupid, or he's a liar just like Jussie.
Posted by Pastorius at 11:38:00 pm

Just that pesky little issue of the check that he wrote to the brothers....

His brother is nurturing a psychotic narrative.