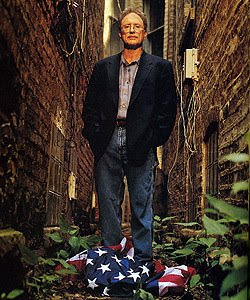 I guess now that Obama is President, terrorists are mainstream enough they are considered acceptable role models for our children.
From Director Blue:

Beverly Person (Band of Mothers) has been keeping me up to date on the campaign against Bill Ayers. Today it's about Naperville High School's invitation to this terrorist nutcase to speak at an assembly of their students.

A confessed and unrepentant domestic terrorist, and accused cop killer has been invited to speak to high school students about social justice.

Did you catch that? I'll repeat: A confessed and unrepentant domestic terrorist, and accused cop killer has been invited to speak to high school students about social justice.

Beverly's (and many others) campaign against this event is showing signs of success. I have already made my calls, it's your turn.

We have received numerous emails and phone calls regarding the proposed visit of UIC professor Dr. Bill Ayers to speak with Naperville North High School students next month, with permission from their parents.

While we firmly believe in exposing students to a wide variety of speakers and opinions, offering them the chance to experience different viewpoints and the opportunity to hone their critical thinking skills (one of the tenants of our mission), please know that we would never invite anyone who advocates violence. Our understanding is that Bill Ayers does not, although this point is being actively debated by several who have contacted us. In addition, administrators from other school districts who have heard his presentation to students, have indicated that Ayers focuses on students being involved in social justice.

Given the interest this has stirred in the community, and the strong emotion and anger that is being expressed, we are currently reviewing this decision and are also exploring options for changing the venue. For those who have expressed concern over funding this, it should be noted that Dr. Ayers was never being paid for this visit.

Once a decision has been made, we plan to update parents of Naperville North students on this issue via Talk203.

It is our responsibility and duty to hound-dog treasonous ingrates like Bill Ayers - to their graves.

An excellent idea. If you prefer to email rather than call, as I do, click here to see how to email all of the members of the Naperville Board of Education.

This disgusts me. This guy tried to blow up the pentagon, did he not?

by the way I didn't even know that he was accused of killing a police officer until now. That makes it even worse.

That creep was invited by a couple of student groups to speak at Boston College this coming Monday but the but the administration found out -- because the Boston Herald called them up and said what gives? -- and had the invitation cancelled. The College Democrats are trying to get it re-scheduled off-campus because they say Ayers-head is a "widely respected academic".

Ayers' little gang of Weathergoons was responsible for about a dozen bombings, including a bomb at the Pentagon. Also one at a military recruitment office in Times Square. Later that same morning 3 of them blew themselves up in their Greenwich Village townhouse bomb factory and Ayers and the rest left town and went underground. I understand the San Francisco police union has accused him of being involved in the killing of a cop out there the next year.

When the Washington Post printed this information -- accompanied by the "but Obama was only 8 years old then!" disclaimer -- they also got letters describing Creepo as a "respected educator" and it didn't matter who he murdered 40 years ago and long live the Weathermen anyway.

Hardly a surprise that the same brand of asshats are inviting him to chatter at them now.

And yet I have come accross some people on other blogs who think that Ayers and the weather underground were not terrorists. Can you believe it?

Damien, did they give you the Chomsky inspired 'one mans terrorist is another mans freedom fighter' bullshit?

These people are brainwashed into believing that the underdog is automatically in the right because all they are doing is resisting the 'oppression' of the powerful. They are taught to view America's power as imperialist exploitation of the poor rather than what it is which is pure economics of free trade capitalism. Thus those who are resisting this perceived 'imperialism' are the noble freedom fighters who can do no wrong, even if they attempt or actually kill, because they have been 'forced' into resistance thus are justified.

It's all nonsense or course, they are just assholes who prey on the weak minded and socially inadequate and use terror as a means of getting attention that they confuse for respect in order to further their need for acceptance. I blame the parents!

Hah! They should try living around them. I was sitting 3 blocks away when that townhouse blew up and wondered where the hell all that smoke was coming from.

And that bomb, an IED filled with nails, was meant to be delivered to Fort Dix where a dance was being held that night.

Not terrorists my ass.

Actually I don't remember any of them giving me the old "one man's terrorist is another man's freedom fighter" nonsense. What I do remember in one instance is one of them claiming something along these lines, that he was not a terrorist, since the only crime he committed was vandalism. Something like that.

Hey, wait, I thought WE were the underdogs now? I wish someone would give us a playbook to keep things straight geez ya can't tell the players anymore. . .

(it's Illinois, home of Uncle Barry the Great Blank Hope what did you expect?)

It's not that he tried to blow anything up, IT'S HIS IDEAS OF WHAT AMERICA SHOULD BE, AND HIS POSITION OF INFLUENCE IN AMERICAN EDUCATION.

He is the heart and soul of the problem.

'All education to be proper must emphasize certain ideas.'

That bomb is going off RIGHT NOW

It still wouldn't be as upsetting or shocking if this guy wasn't guilty of terrorism. He's not even remorseful.